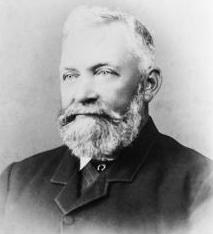 Deasland
Sadly, the well-known 'Deasland' homestead, located on the Barton Highway, is one of the properties...

The postal wars: Ginninderra vs Hall ⧉ (PDF 1.3 Mb)
An article on the struggle between the established settlement of Ginninderra and the new village of Hall over the location of postal services, 1859-1962.

George Harcourt was born in 1842 at Edgbaston, Warwickshire. He was the eleventh and last child born to William Harcourt (1797-1886) and Elizabeth Mills (1795-1886). Elizabeth came from Rock, Worcester, where she and William married in 1819. Evidently the whole family migrated to Australia in 1859, when George would have been seventeen.

By 1860 he was working as a bookkeeper for William Davis (Junior) at Palmerville. In 1862, a post office having opened at Ginninderra in 1859, he became the postmaster and by the following year, he had purchased the Ginninderra store from Davis and ran it in his own right, later rebuilding it. At this stage George was still only twenty, but evidently doing very well!

Harcourt married Ginninderra-born, Millicent Ward from 'Nine Elms' in 1881. She was the only child of Edmund and Margaret Ward, and at the age of twenty three, was some sixteen years younger than George. Edmund, like George, had been employed by William Davis, becoming head gardener at the Ginninderra estate. Later he became George's assistant, until they both 'retired into private life' in 1882. George and Millicent remained in the residence associated with the store however, and began a family. They had three children. The fact that two of them were given 'Ward' as a middle name suggest a strong bond between those two men:

George Ward Harcourt fought in both World Wars and his service is recorded at the ACT Memorial.

George Harcourt made extensive contributions to the community during his time at Ginninderra. He was not just the storekeeper and postmaster, but he also became a notable local cricketer, a Justice of the Peace, an outstanding and enthusiastic shooter, a prominent participant in civic affairs, and a philanthropist. He championed the cause of the Ginninderrans in the 'postal wars' between Ginninderra and Hall, and chaired a meeting organised 'to protest against the surveying of a village site at company reserve No 8 at One Tree Hill in preference to the village reserve on the Ginninderra Creek.[ Wizard's Notes. Goulburn Evening Penny Post 19.7.1881]. When he resigned after twenty years as postmaster he added to his landholdings and became a serious farmer, so that by the time of his death his 'Deasland' sheep and wheat property was 685 acres. Millicent and her sons George and Dudley were to continue farming until 1913.

In keeping with the times, he seems never to have missed an opportunity to shoot the district wildlife - pigeons, wallabies, hares, ducks, turkeys. Some of the shooting is characterised as pest control: Towards the close of the 60s the bush farmers sustained great losses from the depredations of the opossums which continued into the 80s when their skins became valuable. In 1869 the late Mr G Harcourt of Ginninderra went down to the farm of the late Mr John Coppin of the Goat Station and shot over 200; none of the carcasses were skinned. [Queanbeyan Observer (Weetangerra correspondent, 1869]. 'Mr G Harcourt of Ginninderra and his brother recently shot in one day on the Ginninderra Creek no less than over 40 ducks and 5 wild turkeys. [Queanbeyan Age 11.4.1868]

Other expeditions seem more like sport. He was a regular member of William Davis' shooting excursions to the 'Naas Mountains'. In 1876 a shooting party 'spent ten days at Mr de Salis's cottage at Naas. Mr Harcourt left at the end of eight days'.[Queanbeyan Age 13.7.76]. After an earlier trip William Davis wrote in a letter: 'We have just come in from the Booroomba mountains where we have camped for the last eight days, and have brought three hundred skins back with us. We enjoyed beautiful weather and first rate sport. Mr Close and myself shot with rifles. Mr Harcourt and boys with guns. Mr Blair, Mr H Davis and Mr Stephen joined us the last two days and Mr Harcourt with the boys returned to Ginninderra. [Queanbeyan Age 15.7.1869]. His enthusiasm seems to have been unaffected by getting shot (by J McInnes) whilst enjoying a wallaby drive. The injuries 'though severe, are not at all dangerous'.

George was just as active as a cricketer, playing regularly for the Ginninderra team through the eighties, and many times as captain. He was Treasurer for the Canberra and Ginninderra Ploughing Association in 1874 and again in 1879, and in 1891 made a Vice President of the Queanbeyan District Football Club. He was also a keen fisherman: 'Mr Sydney Davis and Mr Harcourt of Ginninderra had some capital sport in the Murrumbidgee on Christmas evening and on the following morning. They succeeded in landing over a hundred-weight of fish one of which weighed about 30lbs. There have been several fine fish caught in the Murrumbidgee of late. [The Golden Age 31.12.1863].

One such fishing trip was the cause of some excitement: 'Report of a fishing party to the Murrumbidgee losing their tent and belongings when their camp fire set alight to the grass and burn the tent. Several sons of Mr Henry Hall of Charnwood were in the party and that gentleman came up from Sydney with a very superior saddle and bridle and silver plated stirrups and spurs, all of these were consumed. In short the party consisted of 9 persons and the estimated loss sustained altogether is at the lowest computation £100. [Queanbeyan age 4.4.1868]

George married in 1881, and retired as store-keeper and postmaster in 1882. He seems thereafter to have focused more upon his farming enterprise. While making his initial land acquisition at Ginninderra shortly after the Robertson Land Acts (1861), he seems to have extended his holdings by both purchase and lease opportunistically over the next twenty years or so. In 1877 for example Mark Southwell leased his Weetangera holdings (236 acres) to George, who came to an arrangement with three daughters of Alexander McDonald to use the Southwell's old home to make shirts, which George sold for 4d each! [Shumack, 1967, p.107] He purchased 120 acres in Goorooyarroo parish in 1889, and leased a further 360 acres there at the same time. In 1892 he had property at Bedulluck, as well as growing holdings just north of the road between Ginninderra and Hall.

In 1893 George commissioned local contractors 'Messrs Lazarus and Holland' to build a substantial home for the Harcourt family. 'The Wizard commented in his inimitable style: "I notice that Messrs. Lazarus and Holland, the contractors, have commenced the erection of a six-roomed cottage a short distance from Messrs. Curran and Gribble's blacksmith's shop as a residence for Mr. G. Harcourt. This, with the new post and telegraph office, when erected, will give quite an imposing appearance to our embryo township. If some one would only build and open a pub - now that might lead to the erection of a temperance hall to counteract its effects-yes and perhaps a lockup, too, for Senior-constable Loughlin to provide us with lodgings when we happened to take "a wee drappie too much!". [Goulburn Evening Penny Post, 24/9/1892, p 7] After completion of the homestead the following year The Wizard glowed: 'Report of being shown over the beautiful new residence of Mr G Harcourt JP in which he and his family have now taken up residence. Both as regards to the architecture of the building and the inside furnishings Mr and Mrs Harcourt are to be congratulated. The outbuildings too are of a substantial kind. [Wizard's Notes Post 13.4.1893]

He seems to have named his homestead after 'Deasland Farm' in Worcestershire, where his parents were married in 1819. But Harcourt only enjoyed his new home for a very short time, as he died in Sydney (where he had travelled to get medical attention) on Christmas Day in 1893 at the age of fifty-one - a short, but very active and successful life. He is buried in Rockwood cemetery.

His widow, Millicent and children, continued to occupy the homestead and run the 685-acre property until the land was resumed in 1913 for the new Federal Capital Territory. Deasland's furniture and effects were auctioned by Moriarty and Co. in April 1913 and the property was acquired by the Commonwealth on 19 July 1913

Harcourt Hill is named after him, and a nearby pub.

The Queanbeyan Age reports that quite a gloom was cast over the Ohristmas festivities when on Monday evening it became generally known that Mr. George Harcourt, J.P., of Gininderra, had succumbed to the serious ailment for which he recently went to Sydney for medical treatment. The late Mr. Harcourt was one of the identities of the Queanbeyan district. By his generous and un assuming manner he had endeared himself to all olasses of the community.

Arriving in the Queanbeyan district about thirty years ago, Mr. Harcourt opened a store at Gininnderra, and by his great business aptitude and commercial integrity succeded in securing the confidence of the settlers in that portion of the district, and also in amassing a considerable competency. His name was synonymous in all his business transactions with that which was straight and honourable.

About eighteen years since he was appointed to the Commission of the Peace, and in that capacity was actuated by the highest principles of meting out even-handed justice to all sorts and conditions of men. By the death of Mr. Harcourt the poor, the sick, and tho afflicted lost a good friend, and one who identified himself in a practical manner with their infirmities and sorrows. Mr. Harcourt retired from business some years sine, and became engaged in pastoral pursuits. Hie remains were interred in the Rookwood cemetery on Wednesday.