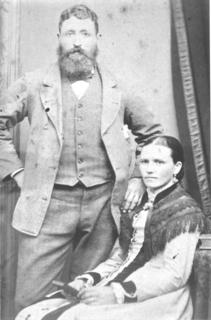 James Thompson Hatch was born in Goulburn in 1837 and baptised there on 25 June 1837, during the period when his father was chief constable in Goulburn. He was the fifth child of Robert and Mary Hatch, and the younger brother of William Hatch (Snr) who established Rosewood farm. Jame's middle name was his mother's maiden name.

He came to Ginninderra in early 1859, but left to test his luck at the Kiandra goldfield, along with a number of other hopeful young Ginninderrans - Robert Kilby, William Bowyer, and Edwin Palmer. Returning after twelve months or so, although not having made a fortune he made good wages and on his return became the first resident blacksmith at Ginninderra. The building in which he worked is still standing beside the Barton Highway. The Currans were blacksmiths there in later years. George Curran, son-in-law of James' brother William, was there from 1874 to 1889.

Hatch settled down into life at Ginninderra, and had built the original Ginninderra blacksmith's shop by 1860. This was also the year that he married fifteen-year-old Mary Ann Jane Daley from Tumut. Mary Ann, was the daughter of Mathew, a carpenter, and Mary, whose maiden name is believed to have been Delaney. The young couple led an industrious life together in Ginninderra.

His elder brother, William Hatch (senior), moved nearby in 1862, later taking up a selection which he called Rosewood. James purchased his own small landholding adjacent to the smithy and, when he wasn't busy at the anvil, he farmed.

But James Hatch's presence in Ginninderra was short-lived. The Hatch family left the blacksmith's shop around 1865. By 1870, James and his family were living at Wodonga in The Terminus Hotel which James had built (1873?). They moved from there to Urana.

A story is told that one day James' son saw the door to his father's blacksmith shop closed. Upon investigating this unusual occurrence he was immediately scolded, told to close the door again and never to mention anything he might have seen: Ned Kelly's horse was being shod! The family later moved to Byrock and finally settled in Brewarrina.

James died at his residence in Brewarrina on 15 January 1896, in his fifty-ninth year, reportedly from heat stroke.
Mary Ann died 11 months later on 13 November 1896 at Bathurst Street, Brewarrina, aged about 52. James and Mary Ann had nine children, one son and eight daughters. Their eldest child, Mary Thompson Hatch was born on 4 July 1861 when her father was the blacksmith at Ginninderra.