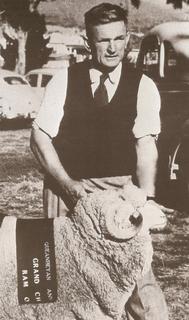 Ginninderra-born Henry Everard 'Babe' Curran was one of the most successful Australian woolgrowers in the 1940s and 1950s, acheiving four world record prices for his clip.

His parents were Agnes Gribble, from The Valley, and Henry 'Harry' Curran, the last of the five Ginninderra blacksmiths. In 1921 Curran married Amy Reid from Tallagandra, with whom he had four children. They had met at a tennis party at Mick Cavanagh's at Mulligans Flat.

Curran commenced his working life in his father's smithy and then as a farmhand, earning a few shillings a week, as a roustabout for Everard Crace. Curran remained focused on becoming a grazier from an early age. As a child he had been ridiculed by his teacher, Charles Thompson, for expecting that he, the blacksmith's youngest son, could ever become a leading grazier.

Babe Curran had to build up his working assets and bloodline slowly. He bought or leased a number of rundown properties throughout the district, starting with Harcourt's Deasland in 1927. As opportunities arose he built up his 14,000 acres of fine-wool holdings throughout Ginninderra and other areas, including even much of the Crace's Gungahlin property. He improved the pastures and the quality of his breeding stock, as best he could. His clip, which sold under the 'HH Yass' brand was primarily developed from a mob of 'expired' Merryville merino ewes, bought cheaply in 1919. To this he added other bloodlines and eventually had enough saved to buy quality Merryville stud rams and invest in much-needed infrastructure. Babe and Amy improved Deasland's pasture, renovated the homestead, constructed a large woolshed, hayshed, shearers' quarters and a farmhand's cottage. They sunk a bore, built dams and a clay ant-bed tennis court.

Once he had everything in place, the records followed. Curran topped the Goulburn and Sydney wool sales nineteen times, set four world record prices, six Commonwealth, eight NSW and twenty-five ACT records for a flock, primarily pastured at Ginninderra from 1927 to 1964.

Curran was also a patron of local charities, a champion cricketer, tennis player, athlete and footballer.

Babe Curran died unexpectedly in October 1964 from a heart attack. He was aged 67 years. His son, Richard, took a few years to wind up the estate, but in the meantime achieved wool records in his own right with the famous Deasland clip.