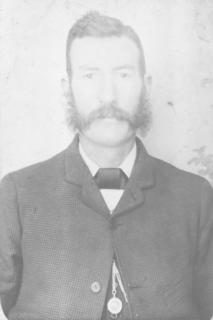 George Curran was the third of the Ginninderra blacksmiths. Busy Curran Drive in Nicholls is named after him.

Curran's Irish bounty-migrant parents, Margaret Conba and Joseph Curran of Cork, arrived aboard the Lascar in 1841 with two other Irish families whose names have also remained closely associated with north Canberra; namely, the Shumacks and the Gillespies. George was born in Queanbeyan in 1852. Nine years later, his father deserted his wife. Facing court to answer for her husband's debts, Margaret was advised by the Queanbeyan magistrate to declare herself formally 'deserted', lest her husband's creditors deem her liable. These were the circumstances in which George grew up. The desertion and poverty his mother faced, helps explain George's own strong focus on family values and hard work, which he exhibited throughout his life.

Curran married Mary Ann Hatch, the niece of the original smith, James Hatch. They raised a family of nine children together.

Family tradition places George in Ginninderra as early as 1872, probably as an assistant or apprentice of Flourence McAuliffe. Whatever the case, he took over the smithy in his own right by 1876, aged 24. George's younger brother, John, became the smith at Murrumbateman. Between them, the brothers would have had a good grip on the blacksmithing trade along that portion of the Yass-Queanbeyan Road in the 1876-89 period.

Curran employed at least two formal apprentices. One was his orphaned nephew, Harry Curran, who came to work with him in 1882. But there was also Michael Hickey, the son of the local schoolmaster, who died unexpectedly of heart disease in 1889, aged just 18 years.

The Queanbeyan Age reported "You can hear the notes, loud and clear, with all their variations, from the anvil of Mr George Curran's blacksmith's forge". The Currans (both George and Harry) seem to have had a particular interest in the equestrian side of their business. They were involved in the local races of the One Tree Hill Racing Club, serviced the military stable at Duntroon, and also assisted the Smith family's successful draught-horse stud.

In 1889 George Curran decided to leave Ginninderra, moving to Bungendore, where he prospered as the village smith. George died there in 1918, at the age of 65 years.