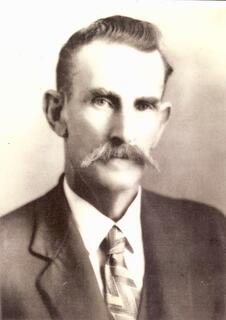 Henry Roland Curran - known as 'Harry' - was the last full-time blacksmith of the ACT. He worked at the Ginninderra Blacksmith's Workshop first as an apprentice for his uncle, George Curran, from 1882 to 1889. In 1891 he returned to take it over in his own right after Alexander Warwick walked out. He stayed there until he retired in 1949, aged 82. At that time, he was also the oldest professional blacksmith in the country.

Harry's father was Henry Joseph Curran, a journalist with the Catholic presses in Goulburn, Boorowa and Sydney. He and his wife, Anne (nee Lodge), both died suddenly, so that in 1882 fourteen-year-old Harry found himself orphaned and responsible for his five younger siblings. He did his best with factory work in Sydney, but he was forced to put the baby in the care of a Catholic orphanage. Fortunately, his uncle, Patrick Curran, intervened to broker places for all the children amongst different family members. The solution for Harry himself was to be sent to Ginninderra as an apprentice blacksmith and wheelwright to his uncle, George.

Back in Ginninderra, Curran wasted little time in marrying local girl, Agnes Gribble, from The Valley. It also seems that he worked the smithy in the early years in partnership with Agnes' brother, George Gribble. In 1893, he found himself indirectly involved in a criminal case brought against his brother-in-law, who was charged with stealing seed corn from John Southwell, and stowing it in the blacksmith's shop. Fortunately, Gribble was acquitted.

By the late 1890s, George and Agnes had built a weatherboard home with a corrugated iron roof, situated about 100m east of the workshop. Family members recall Harry sitting by the fire, smoking a pipe and punctuating his conversation by spitting directy into the coals. In 1923, artist, Eirene Mort, when compiling a collection of works on the Canberra district, visited Curran and made a pencil sketch of him at work at his anvil. Her drawing is now part of the collection of the National Library of Australia and is on loan to the Canberra Museum and Gallery's permanent display, which also features Curran's smaller anvil and swage block.

Harry Curran might have been a rough diamond, but his workmanship was not. He quickly established himself as the region's most skilled smith. On occasion, he even had to defend the integrity his work, as some thought it was of such high calibre that it could only have been machine-made.

Curran was also prominent in the organisation of the first shows of the Ginninderra Farmers' Union. He was the inaugural treasurer and organised some of the first ploughing matches. He is also recorded as one the founders of the Royal Canberra Show, for which he toiled as an active committeeman until August 1944, when his son, Henry 'Babe' Curran, reported his father's desire to step down after 40-years service.

Ultimately, life in Ginninderra was good for the Currans. Their daughter, Vera, was the driving force behind the earliest local women's cricket team and was one of the district's first professional nurses. She married William Carney, a Gallipoli veteran and spent much of her life in the Ginninderra district. Harry's two boys, 'Chappie' and 'Babe', both became graziers. Babe, in particular, was renowned for putting Canberra on the Australian wool-growing map.

In February 1954, when the Queen visited Canberra, Curran was one of seven elderly 'pioneers' invited to the Albert Hall to meet the royal party. Lionel Wigmore recorded that, when he was introduced to the Duke of Edinburgh, who remarked, 'you must have worked very hard', Harry's laconic reply to young Phillip was, 'Too right I did!' Just two years after he was introduced to the Royal party, Harry Curran, the last professional blacksmith of the ACT, died.

In December 2020 Chris and Lyn McAppion (Benn) donated a treasure to the Hall School Museum and Heritage Centre - the final ledger used by their great grandfather, Henry (Harry) Rowland Curran, the fifth and last smithy to ply his trade at the Ginninderra blacksmith shop which was built in 1860.

The ledger documents, in free-flowing handwriting, the services Harry provided for his many customers from 1914 until 1945, just a few years before his retirement at the age of 82: reputed to be the oldest professional blacksmith in the country. The Centre mounted a display centred on the ledger which was opened in April 2021. The following text was included within the display.

He established himself as a first-rate artisan, with many acknowledging that he was the most skilled smith of the Limestone Plains. On occasion, he even had to defend the integrity his work, as some thought it was of such high calibre that it could only have been machine-made.

Back in Ginninderra, Curran wasted little time in marrying local girl, Agnes Gribble, from The Valley and together they had three children: Vera, Arthur 'Chappie' and Henry 'Babe'. By the late 1890s, George and Agnes had built a weatherboard home with a corrugated iron roof, situated about 100m east of the workshop where they lived for most of their married life, surviving a massive bushfire in 1905.

Harry and Agnes were highly respected members of the Ginninderra community, with Agnes an accomplished cook, dress maker and sportswoman. Both were gifted in horsemanship – Agnes as a sulky driver and Harry as an expert farrier, travelling each week to tend the horses at the military stable at Duntroon. Perhaps Harry's most important contribution to the local community was his long-term work in supporting and developing the local agricultural shows: primarily that of the Ginninderra Farmers' Union. These shows were held in the field opposite the blacksmith shop.

The blacksmith was an important person in 19th century Australia. He provided an essential service to the local community including shoeing horses, manufacturing small implements such as nails and bolts, and larger ones such as ploughs. He also repaired horse-drawn vehicles. The Maloney family bred and raced horses and were frequent customers. One of their horses 'Moonlight' appears often in Harry's ledger. It won the 1933 St Patrick Day Handicap in front of Prime Minister Lyons and 500 spectators, at the old Acton racecourse wearing four of Harry's best racing quality horse shoes.

In June & July 1914 Harry supplied Freddie Johnston, a young surveyor working with Scrivener and Mouat on defining the Federal Capital Territory border, with his tools of trade. The ledger records show that Freddie was given a discount, probably because he paid at the time he received his goods – an unusual occurrence at the time. Johnston went on to become the Commonwealth Surveyor General.

The Blacksmith was also a focal point for social gatherings, especially in winter with the warmth generated by the forge. The presence of an Aboriginal glass artefact on site supports historical documentation that Aboriginal people were also attracted to the workshop.

Despite the quality of his work by the 1930s demand for his services had waned, with a diminishing reliance in the district on horsepower. The scant entries in his ledger confirm this decline in demand. A brief respite came during the petrol rationing of the war years, which enabled him to continue at his forge but when the Menzies' Government came to power in 1949, promising to end the rationing, he could see that the game was up. The smithy's shop was closed and Harry retired.

The blacksmith shop lay in disrepair for many years. Beginning in 2004, conservation work was completed under the direction of ACT Heritage, an Interpretative History of the site was completed in 2011 and in 2013, under the ACT Government's Canberra Tracks heritage program, the site was stabilised, the original bellows placed in situ and a security fence mounted around the perimeter of the building. Its long-term future is uncertain.