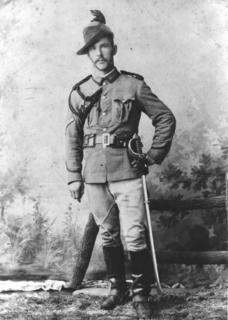 The Gribbles were a well-known Ginninderra family. Tom Gribble and Kate (nee Warren) settled at what was to become known as The Valley in 1860. The fourth of their seven surviving children, George, was born in 1868. George was to become, arguably, the first international sporting star of the Limestone Plains.

George and two of his brothers (William and Thomas) served as members of the local detachment of the NSW Mounted Rifles. George was the most talented of the trio. His ability was first noticed when the mounted riflemen were drilled before senior officers at Duntroon in 1893. He was soon promoted to the rank of Farrier-Sergeant. Four years later, George was one of four local men selected to represent the Australian colonies in military competitions in Dublin and London to celebrate Queen Victoria's Jubilee. The three others were: William Rolfe, F.E. Smith and Harry Oldfield. Unexpectedly, Gribble easily won the tent pegging - i.e. a competition for horsemen using a lance. According to reports in the Queanbeyan Age and other newspapers, Queen Victoria personally presented him with a silver cup as a trophy. George's victory had been a shock result. In the Jubilee celebrations, he also even won the buck-jumping contest and top-scored in a cricket match in which the Australians defeated the British eleven.

No doubt, it was long enough ago for the British public not to have begun to tire of Australian sporting successes and their audiences were still keen to applaud the efforts of the Antipodeans. George and the other lancers were recruited to participate in staged re-enactments of a shoot-out between troopers and bushrangers for the English crowds, reminiscent of the pantomimes of the American Wild West shows.

When Gribble returned to Australia, he continued his sporting activities. He was not only a formidable footballer and cricketer for the Ginninderra teams, but he became the district's champion steel-quoit player (undefeated for a decade). During working hours, George toiled on his parents' farm, in the family butcher's shop in Hall and he also had a stint helping his brother-in-law, Henry 'Harry' Curran in the Ginninderra Blacksmith's Workshop. But mostly, he worked with his brothers and nephews on the family's steam-powered traction engine when it was hired out. In 1907 a young Queanbeyan man named, Nicholas McInnes, had his arm mangled in the Gribbles' chaff-cutter. George's first aid saved McInnes' life, but not his arm. He rode the man to Queanbeyan hospital at such pace, that the poor horses were never fit enough to pull a dray again.

George Gribble also had a more colourful side to his life. In 1893 he had to answer a charge of stealing seed-corn from John Southwell at the Queanbeyan Police Court. The stolen property was discovered, suspiciously, in the Ginninderra smithy. But the case against Gribble was weak, relying on footprints in the mud, and he was acquitted. Nevertheless, he seemed to have a reputation for being a little 'wild'. In 1908, during a visit to Sydney, it is said that, after a bout of drinking, Gribble was seriously injured by a tram.

George Gribble did, eventually, settle down to a quieter life. By 1905, he seems to have taken over the running of The Valley with his brother, Tom. At the age of 42, in 1910, he is recorded as moving to Queanbeyan, where he married Margaret Courtney Moore, the daughter of the well-known Queanbeyan couple, William and Catherine Moore (nee McKenzie).

George and Margaret Gribble settled down to family life in Queanbeyan. Margaret, who was also aged 42 when they wed, was to have just the one child: a son named, Courtney. George used his experiences from running the family traction engine to secure a job as an engine driver on the NSW Railways, stationed at Queanbeyan.

George Gribble, one of the district's most colourful and celebrated personalities, died in 1947 at the age of 79, five years after his beloved, Margaret.