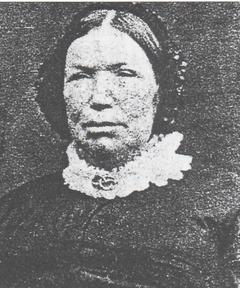 Julia Webb, born in 1820 in Kilkenny, Ireland, arrived in this district with her husband John in 1841. She was the daughter of Walter Hoolihan and Bridget (nee Dowlan). Pregnant with the first of their ten children (eight survived), she and John came as free settlers, under a sponsored Bounty system. On their documents John is listed as a labourer, and Julia, a nurse. Both could read, but not write.

Like other free settlers of the Catholic faith they were welcomed by James McCarthy of 'Glenwood', Ginninderra. Several of the Webb children were born on this property and the others at properties where John worked as a farm labourer.

Julia was a district midwife reputed to have never lost a case. She was a capable nurse too, setting broken limbs and stitching up wounds. She also laid out the dead, an essential service. She was much loved and respected in early Canberra.

But it is for her other business, as the hostess of the 'Grant Inn', situated near the present suburb of Dunlop, that she is also known. Without a liquor licence, and known locally as 'Judy the Great', Mrs Webb ran a 'sly grog shop' out of her slab hut. As her shop was off the beaten track and loved by locals, she was able to operate for many years with impunity and little fear of legal action.

In 1854 she placed an advertisement in the Goulburn newspaper explaining why she had to increase the price of her drinks. It appears a carter tipped over the dray, and, not wishing to waste the liquor, he drank most of it! In this advertisement Julia calls herself – 'Judy the Great'! Considering her contribution to the fledgling communities in the area, especially in the Ginninderra region in the 1860s, until her death on the 1 September 1877, Mrs Julia Webb was truly 'great'!

Many of her customers were ex–convicts who worked as shepherds and farm labourers for the big landowners. In the 1850s, Julia, with a very young family and a household to run, still provided a warm and friendly environment, even if it was against the law.

Judy was forced to close down after a conviction at Queanbeyan Police Court and was fined £30 (half of which was claimed by the unpopular informant). 'Judy the Great' went to live at Springbank where she continued providing people in the Canberra district with nursing services. 'Springbank', was where Julia, aged forty in 1860, had the last of her children, her second set of twins, William and Richard. Sadly both boys died soon after their birth.

Julia, who died at the relatively young age of 57, of 'fatty degeneration of the heart', is buried with the twins in the Riverside Cemetery, Queanbeyan. But they are not mentioned on her handsome gravestone bought by public subscription.