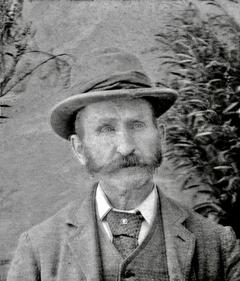 Malachi Hollingsworth was born in 1844 probably in the Gundaroo district. His parents were emancipated convicts: Michael Hollingsworth and Maria (nee Prestage).

He married Susannah Curran in 1873 at St Augustines Catholic Church Yass. They had eleven children together.

The Hollingsworths ran the 'Travellers' Rest' inn at Murrumbateman. In July 1896 they purchased the 'Cricketers' Arms' at One Tree Hill, taking over from James McLaughlin who had been the Licensee since July 1890. Susan and Malachi ran the hotel until Malachi died two years later in July 1898. Susannah then took over the licence in her own right and successfully ran the business for another seven years after Malachi's death.

Telegraphic information was received on Saturday last of the death of the much respected host of the Cricketers Arms Hotel One Tree Hill, Mr Malachi Hollingsworth at the age of 55 years. Deceased who had been suffering for some considerable time from internal growth and hydatids had upon the advice of his local doctor entered one of the Sydney hospitals for the purpose of undergoing a surgical operation; two of which were performed on him with every appearance of success, but pleurisy superseded and caused death.

During the short period the deceased held the hotel he had by his geniality and a liberal manner made a host of friends and everyone sympathizes with his widow and family in their sad bereavement. The deceased leaves a wife and eleven children the majority being of tender years. Mr S Buckmaster (son-in-law) and Mr H Curran brought the remains to Yass on Monday at which place deceased will be buried. [Queanbeyan Age (Ginninderra correspondent) 13.7.1898]