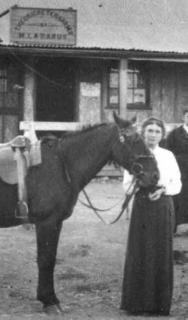 Rosewood
'Rosewood' - home of the Hatch family of Ginninderra. Robert and Mary Hatch, who arrived in...

Ginninderran, Margaret Sophia Lazarus (known as 'Doll') was the daughter of William Hatch and Margaret (nee Ryan) of Rosewood. She was born in 1861.

In 1902 she married the widowed 'Mon' Lazarus. They were to have two children. In August 1905 they bought the Cricketers' Arms hotel at One Tree Hill.

In 1917 the Minister for Home Affairs, King O'Malley, prohibited the selling of alcohol in the new Federal Capital Territory (FCT). Previously, another North American, Walter Burley Griffen, had criticised the excessive drinking taking place at the hotel by the workmen employed on the new capital. The Cricketers' Arms, the only pub in the FCT, was forced to close within six months. In June 1918 the licence was relinquished and the Lazarus family moved to Appin. After a hard fought legal battle with the Commonwealth, they were eventually compensated over £3,000 for the loss of their business and land.

"Report of the death on January 21 at her residence in Carlton St Kensington of Mrs Margaret S Lazarus, relict of the late Morris Lazarus who for many years conducted the Cricketers Arms Hotel at Hall. Mrs Lazarus who was 81 years of age was the third daughter of the late Mr and Mrs William Hatch of Rosewood, Hall. She is survived by a daughter Miss Mary Lazarus of Kensington and a son, Mr John Lazarus of Sydney". [Queanbeyan Age 9.2.1943]

Margaret and Morris Lazarus outside the Cricketers' Arms, 1918 ⧉