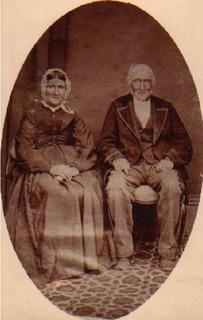 John Casey was an Irish rebel. His father Mark Casey was a farmer; his mother was Mary Ellen Maher. At the time of his trial John Casey was twenty seven, married with two children, and his native place was Tipperary. 'Height 5 ft 4 inches, complexion fair ruddy – mole on right knee. Colour hair dark brown, eyes dark hazel'. A farmer's labourer, he was tried at Cashel on 10.4.1824. His offence - insurrection. Sentence, seven years. As no records have been found for any of them it is surmised that his wife and children died some time after John's transportation.

John Casey was transported to Australia in 1826 on the Sir Godfrey Webster, destined to spend the next sixty-five years in the colony. John Casey was possibly the first bullocky servicing the Limestone Plains, including Ginninderra, in the late 1820s.

He won his freedom early by helping capture the bushranger John Tennant in 1827 in the party led by James Ainslie. He duly received his ticket of leave in 1828.

In the 1828 census it is recorded that he had a seven year sentence, was a roman Catholic, and was employed as a bullock driver to Mrs Broughton (Goulburn Plains. NSW. Census 1928). He was subsequently assigned to Joshua Moore and drove bullock teams from Liverpool to Canberra, supplying the district.

Casey became one of the early pioneers of the Tallagandra district to the north of Mulligans Flat. It is reported that he took up a selection of sixty acres there, some time before 1873.

"The Caseys found themselves a small leasehold at the Back Creek end of Tallagandra which they called 'Sugarloaf', just north of the current ACT border.They flourished. John must have sung the praises of the new country, so much so, that his brother Thomas came out to join him as a free settler in 1841. Tallagandra became predominantly Catholic and known as a 'stronghold' of the Casey and Reid families.......their humble origins meant that it took them thirty years to earn enough to purchase their own land. They had been leasing a small block on which they had built their home, but they had limited access to pasture for their flocks. John agitated or used roadways and common land, once being fined for not being able to contain his stock. Primarily his income came from hhis work as a bullock and as a ploughmen or shepherd for other men. Nevertheless, John Casey managed to save enough hard-earned cash to purchase two small selections of 60 and 40 acres"' [McDonald: 2018:441]

Casey was involved in a court case in 1861: Samuel Spalding was charged with on the 16th maliciously and unlawfully maimed a working bullock, the property of John Casey of Back Creek, Gundaroo, by breaking its near hind leg with a tomahawk. District Constable Joseph Tinge, William Casey, James Casey (sons of James Casey) and John Casey gave evidence. Spalden was committed for trial at the quarter sessions. [Golden Age 31.10.1861]. A subsequent trial jury found Spalden not guilty.

John Casey died 'of general debility' in 1882 after being 'confined to his residence for a long time', and is buried in the Gundaroo Catholic Cemetery. The Post offered the following reflections: Died at his residence 'Sugarloaf' on Monday night 22nd May at the age of 88. He was among the earliest arrivals in the district and settled many years ago in close proximity to his present residence where he followed the occupation of farmer and grazier. The funeral took place on Thursday and despite torrential rain some 200 people followed the funeral to the RC Cemetery, Gundaroo. [Wizard's Notes, Goulburn Evening Penny Post 30.5.1882]

He is pictured in the photograph (c. 1870) with his wife, Caroline [Purcell].