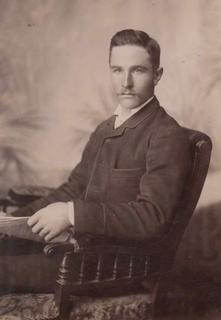 The Glebe
The property, which eventually became known as 'The Glebe', was first settled by Donald Cameron...

William Gribble was the son of Thomas Gribble and Katherine (nee Warren) of The Valley.

The Gribbles were known for their talents on the sporting fields. William was no exception. In particular, he was a stalwart of the Ginninderra cricket team from the mid 1880s through until the early 1900s.

Gribble married Mary Ann Southwell in 1892. They spent most of their lives farming at The Glebe, which is now covered by the suburbs of Spence, Evatt, Florey and Melba. Together they reared nine children and built up the property into a good sheep station with a comfortable home. They even grew a little wheat, oats and maize, and invested in Berkshire pigs on the side.

In 1897 the Gribbles suffered a setback when a fire at nighttime destroyed a detached two-room kitchen at The Glebe. The event demonstrates the wisdom of the pioneer families who kept their kitchens detached from the bedrooms of the house.

William, his brothers, and his sons operated the family's 15-ton steam-powered traction engine and chaff-cutting machinery, servicing farms all over the district. One of his sons, Ernest ('Ernie') William Gribble was tragically killed in an accident while driving the traction engine in Hall in 1920.

In his recollections, Leon Smith recalled:

Even before the beginning of the century the farmers had their grain thrashed by a machine which was transported from one farm to the other for that purpose. Mr W. Gribble had such a machine and used it to thrash the grain of farmers in the Hall locality for many years, a practice discontinued when harvesters came into use in the early 1920s. The thrashing plant required 15 men for full operation. Its operation brought together quite a gathering of farmers and workmen. Usually no wages were paid to those good folk, who received free help in return.

With his brothers, Gribble was a member of the Ginninderra detachment of the 1st NSW Mounted Rifles. He served in South Africa in the Boer War as a Lance Corporal, but was invalided home in August 1900.

In the early 1900s the Gribble brothers also ran a butcher's business.

William and Mary Ann's children eventually took over the running of The Glebe. In the early 1900s, he also invested in a house in Hall located on the south-western side of Victoria Street; premises which were later occupied by his brother-in-law, Cedric Southwell, by 1912.

Unfortunately, due to his father's dementia before he died in 1927, William was disinherited. He contested the will and had his share in his parents' estate reinstated.

William Gribble died from a heart attack in March 1946 at the age of 79.