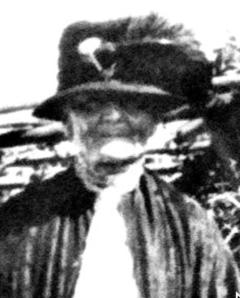 Margaret McAlroy (or McElroy) was born, c. 1814, the daughter of Daniel (or Samuel) McAlroy, a farmer, and Mary (nee Gilloway). She arrived in Australia from Ireland on assisted passage in 1842 under her maiden name.

She had married Bryan (sometimes spelled 'Brian') Logue in Ireland in 1840. They had at least six children together.

Margaret was recorded as living at 'Camberry' homestead when her husband died in 1860. After being widowed she returned to her employment as a domestic servant.

She remarried three years later in 1863. Her second husband was Irishman, John Crinigan, who had been transported to Australia in 1836 on the Waterloo. He had been widowed two months earlier and was living at Crinigan's Hut on Ginninderra Creek.

They eventually moved back to Canberra and lived on the site of the National Library (by 1867). Margaret is recorded as escaping serious injury during a bungled crossing at Canberry Ford over the Molonglo in 1890.

Margaret, who became known in the district as 'Granny Logue', followed him in 1904. She had been living with her granddaughter. Margaret is interred with her first husband, Bryan Logue.