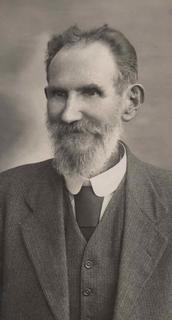 James Gillespie was born in February 1844 at Klensendorlffe's farmhouse in Canberra. His parents were early Ginninderra free-selectors, John Gillespie and Mary Ann (nee Hutchinson) of Horse Park. He married Isabella Hay Jones (known as 'Belle') in 1882 and they had four children (Eva, John, William, and Harold). They built Elm Grove, where they lived for the rest of their lives.

Like his father, James was very active in the district as secretary of a number of sporting organisations and a member of political associations. He is also affectionately remembered as being a regular writer of the 'Ginninderra Notes' for the Goulburn Evening Penny Post as 'The Wizard'. Without his regular reports on life in the district published in the press, Ginninderra's history from this period would be significantly poorer.

Samuel Shumack recorded a controversial story in his recollections, which claims that James Gillespie and George Curran were responsible for the accidental drowning of shepherd, Thomas Studley, in 1881 on the Murrumbidgee River at the place now known as 'Dead Man's Hole'. It is said that, as part of a prank, Gillespie threw a rock at Studley in the river and it hit him on the head, causing the poor man to drown, before Curran and Gillespie could save him.