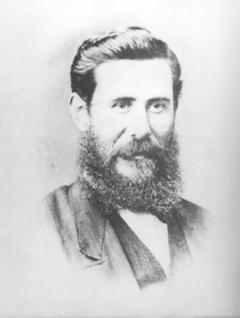 George Randleson Hutchinson Gillespie was born in Northern Ireland in 1840, the year before his parents (John and Mary Ann Gillespie, nee Hutchinson) migrated on the Lascar. The Gillespies settled first at Canberra, then established Horse Park at Ginninderra.

In 1862 he became a free selector, taking up 320 acres adjoining his parents' property at Horse Park. He farmed his land and also set up a business as a teamster. He and Mary Ann remained as residents of the Ginninderra district for some years, but by the early 1890s had moved to Oaks Estate. George Gillespie died in 1927 and is buried in Queanbeyan Riverside Cemetery. Mary Ann followed him three years later.