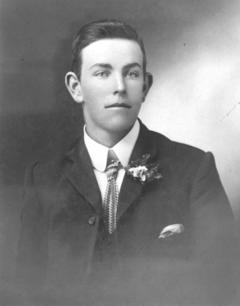 Fairy Bower
Fairy Bower – a cottage in the village As settlement increased throughout the colony of...

William Ernest Gillespie was born at Ginninderra in 1886 to James Gillespie and Isabella Hay Gillespie (nee Jones) of Elm Grove. He married Lilian Reid of Spring Flat, Tallagandra in 1918. He was known affectionately as 'Sonny' within his family, but 'Bill' more broadly.

Gillespie attended school at Mulligans Flat until breaking a slate over the teacher's head when wrongly accused of a misdemeanor. He completed his education at Bedellick.

Bill Gllespie worked around NSW as a shearer in his youth and as a farmhand at Bywong Station. After his marriage he and Lilian moved into 'Cooee' at Hall briefly, before relocating to Queanbeyan. In these years he carted wood and worked as a landscape gardener. In 1925 Gillespie appears at Well(s) Station as the manager and then in the following year living in one of the old Palmerville cottages.

In 1926 they purchased a block in Hall from Richard Southwell (Block 1, Section 4) and built a small two bedroomed cottage which they called Fairy Bower. This was their home until 1939

In 1939, the Gillespies finally settled down into a more permanent arrangement, moving to Turner in Canberra. William found employment with the parks and gardens department, Canberra High and eventually with ANU as a groundsman. Tragically, he died in 1972 from the effects of ingesting a poisonous spray he was applying to his fruit trees.

William and Lilian were the parents of prominent Canberran and the first Ginninderra historian, Lyall Gillespie.