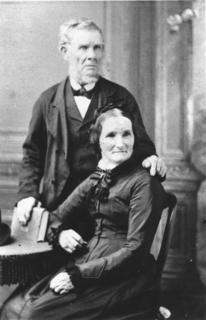 Morris' Bootmakers
Henry Morris arrived in Sydney in 1833 as a convict, aged 18. He spent several years in the...

Hannah Cooke was born on 5 February 1826, daughter of Thomas and Mary Ann (nee Crouch). Thomas was a carpenter and they lived in Salehurst Parish, East Sussex, England. Thomas and Mary Ann had married on 9 January 1821 at Ewhurst, Sussex, a village about 35 miles south west of London. Hannah was the third of eight children. She and baby Mary were the only girls.

Hard times in rural Sussex were brought on by economic depression in England in the latter part of the 1830s. The Cookes decided to emigrate to the colony of NSW on assisted passage. They received an allowance of sixteen pounds, five shillings to provide clothing and travel to the port of departure for the family. (This information was listed at Salehurst Poor Law Union in East Sussex Office). The family sailed from Tilbury Docks at Gravesend on the 535-ton barque, Lady Nugent, in July 1838. With Thomas and Mary Ann were their children - William aged 16 years, Thomas 14, Hannah 12, James 10, John 8, Henry 6, Edmund 4 and Mary 1.

[Also travelling on this ship were Thomas Southwell, his wife Eliza and their two children. The Southwells would later settle at Parkwood and raise a very large family. While the Southwells chose Ginninderra, the Cookes settled first at Cobbity.]

Sadly Thomas (Cooke) died four months after they arrived, leaving Mary Ann a widow in a new country with eight children to raise. As Hannah, who had just turned thirteen, was the only girl, except for baby Mary, she would have had to assume a great deal of responsibility to assist the family.

George Simpson became Mary Ann's second husband. He was was born in 1793 in Yorkshire and had been transported to Australia for sheep stealing. In 1818 Simpson was granted an 'Absolute Pardon' by Governor Macquarie and in that year and the next he accompanied John Oxley on his expeditions as a 'chainman'. This helped earn Simpson a land grant at Airds, near Campbelltown. In 1821 he married Ann Hayden and together they had ten children. Tragically, Ann died in 1841. As a widower Simpson started a relationship with Mary Ann Cooke. They were married two years later (1843) in Cobbity.

Hannah Cooke married emancipist Henry Morris on 1 July 1843 at the same church where her mother had married George Simpson less than three months before. They were to have eleven children together. At first, Henry worked for the Cowpers at 'Wivenhoe House', Narellan. Charles Cowper was Premier of the colony five times. By 1855, Henry had managed to set up shop as a shoemaker.

It is not known exactly when Henry and his family moved south to the developing settlement at Ginninderra but it is thought to be 1868. Thomas Samuel Gribble had briefly operated a bootmaking business at The Valley in 1863-64, but had closed shop and relocated to Sydney. By the late 1860s commercial life had developed around the settlement and there was a much stronger need for a bootmaker.

Henry and his wife Hannah (nee Cooke) arrived by bullock dray with their family from the Camden district. A bootmaker by trade, Henry established a tannery there to provide the leather for his bootmaking business.

The site of Henry Morris' house and tannery is now in the garden adjoining the Gold Creek Chapel.

A group of Ginninderra residents in 1872 applied for a provisional school with Henry and others pledging to send their school age children, if a school were built. They were successful and a non-denominational school opened the next year.

Henry and Hannah worked tirelessly and were respected for the high quality of workmanship in the boots and shoes they produced. Hannah made the children's shoes. Their children were taught the trade and several of the boys became successful bootmakers in latter years. Their son, William ('Billy'), became the well-known Hall bootmaker.

At the age of 79 years, Henry Morris passed away from senility in 1894. He is buried at St Paul's Burial Ground. Hannah continued to live with her son, Billy, his wife Louisa and their children at 'Dellwood', a short distance north of Hall. All of the family was involved in leather preparation, shoe making and repairs. The girls made patchwork quilts from possum and other hides, skills no doubt taught to them by Hannah in her old age.