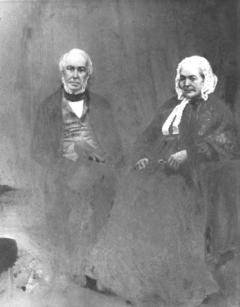 George junior's grandfather was John Palmer, who had been the purser on HMS Sirius and returned to the colony in 1806 with some of his family. Eventually, George senior also arrived in Australia, where he became the commissary. His father was also the brother-in-law of Robert Campbell who was responsible for the establishment of Duntroon in 1825. No doubt, his extended family's pastoral interests on the Limestone Plains prompted his father in 1826 to send a party to carve out his own farm in the Limestone Plains at Ginninderra, subsequently known as Palmerville estate.

But this was all happening while George Palmer junior was still in England. In 1838 Young Palmer married Selina Augusta Rowes at Epping in Essex. They were to have ten children together.

In Australia in 1835, George Palmer (senior) sent his cousin, Charles Campbell, to Ginninderra to manage Palmerville for him. This may have been an arrangement entered into by both parties with a view to Campbell taking over the estate. Shortly after, a sale was arranged, but Campbell defaulted on his payments and the property reverted back to George (senior).

By 1841 George (junior) and Selina arrived in the colony. By 1845 he took over the running of the burgeoning 11,729-acre Palmerville estate on behalf of his father and resided there with his young family. George and Selina's fifth child was the first to be born at Ginninderra in February 1846.

The Palmers contracted William Davis (junior) to manage Palmerville which was an excellent decision, as Davis turned the estate into a model pastoral enterprise. In 1850, Davis became Palmer's brother-in-law when he married Palmer's sister, Susan Adriana Palmer. When George (senior) died in England in 1854, the estate at Ginninderra was left to Susan. Her husband, William Davis, now found himself in effective control of Palmerville.

Despite the estate now being managed in trust for his sister, George (junior) stayed on. In 1859 he opened the ACT's first post office, but only remained as postmaster for four months. At some stage, George and Selina Palmer moved to Goulburn. George died there in 1889 and Selina in 1902.