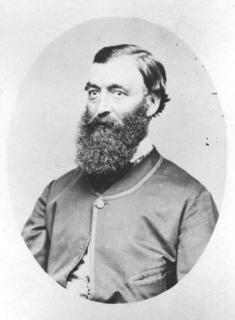 Frederick James Davis was born at Bloxham in Oxfordshire in 1827 to William Davis (senior) and Elizabeth Jane Davis (nee Weston).

He arrived in the colony with his parents on the Palestine in 1842 at the age of fifteen.

The family first stayed with Frederick's sister, Mary, at Lanyon before settling at Booroomba (at Paddy's River), where Mary's husband, James Wright, had built them a home. They established a cattle-and-sheep run of about 4,500 acres and also ran a small herd of brumbies.

In the 1840s the Davises struggled to make ends meet at isolated Booroomba and even diversified their operation to include a boiling down works for tallow production. The family remained at Booroomba until 1859 when they sold out to Charles McKeahnie of Gudgenby. At this time, Frederick was 32 years of age.

Most of the Davises moved to Ginninderra, where Wiliam Davis (junior) and his wife Susan Davis had Palmerville estate. William found his younger brother a position as the Ginninderra postmaster, which he undertook from July 1859 to February 1861.

In 1862, Frederick followed his brother's lead and married a Palmer. His wife, Minna Close Davis, was the daughter of George Thomas Palmer (junior) and Selina Augusta Palmer (nee Rowes). They were to have three daughters.

From the mid 1870s, Frederick and Minna lived at 'Woodhouselee' about 20 km north of Goulburn. He served as one of the church wardens at St Stephens and took up the position as postmaster for Woodhouselee in 1876. He purchased the well established Pigeon House Inn and ran this hotel for a number of years.