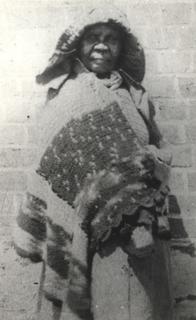 Nellie Hamilton is one of the most important figures of Ginninderra history. She was highly intelligent and articulate (including English) and a frank advocate on behalf of her people. When questioned about the invasion, Indigenous dispossession, and European law, she is quoted as providing the following response.

You come and take our land, kill our game and let us starve, and if we take a sheep or kill a calf, you shoot us or put us in gaol. You bring your disease and give it to us - we had nothing like that until you came and stole our land - you give us rotten blanket and bad rum.

Family members report that her first partner was Hamilton Hume, with whom she had a daughter, later known as 'Queen Lucy'. Nellie took Hume's first name as her own surname.

Her next partner was Bobby Hamilton, a talented Ginninderra stockman and cricketer in the employ of William Davis (junior). He also seems to have worked for Flourence McAuliffe, Ginninderra blacksmith. Bobby and Nellie had at least three children together.

In late 1871 Nellie's family contracted measles and her eldest son, Eddy, died. In 1872, her husband died of tuberculosis (or consumption) despite attempts to save him in Queanbeyan Hospital.

In March 1873 Nellie and a close friend, Ju Nin Mingo (known as 'Nanny'), were imprisoned for a week for defaulting on a fine for being intoxicated. On a trip to Cooma to visit the Ngarigu people, she and Nanny were refused a free passage on the mail coach and decided to walk many days through the winter weather. Not long after this trip, Nanny died as a result, it is said, of the rigours of this journey.

Later that year, John Breen took a horse that Nellie had tied up at a hotel where she was employed as a cleaner. It was then sold to George Rolfe. She lodged a written claim against Rolfe as unlawful owner and took him to court in March 1874 and won the case, but was not awarded any compensation.

Nellie Hamilton seems not to have lived in Ginninderra for long after Bobby died, spending most of her time in the greater Queanbeyan area. Nevertheless, she was a frequent visitor to her old friends at Ginninderra. In the late 1870s she appears to have resided in the Braidwood area. Her last two husbands, Parson Williams and King Billy were both from that area.

In 1888 Harold Mapletoft Davis and the Queanbeyan council applied to the 'Aboriginal Protection Board' to have her leadership as a Ngunnawal elder recognized through the awarding of a brass breastplate. The application was successful and she became widely known thereafter as 'Queen Nellie'. She was invited as one of the dignitaries to oversee the opening of the Tharwa Bridge in March 1895.

A number of members of the European families of the district recalled vivid memories of Queen Nellie. In her recollections, May Walker wrote of her that she 'never went anywhere without her dog, Jerrabung, and her pipe ... Everyone liked her because she was a good old soul who never did anyone any harm, even in thought.'