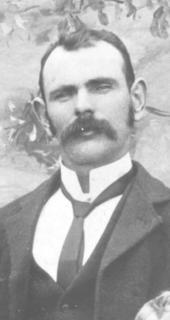 George Shumack was born in 1870, the son of Peter Shumack (known as 'Big Pete') and Elizabeth Shumack (nee Gillespie). In 1895 he married Edith May Gozzard (known as 'May'), the daughter of Henry Gozzard of 'Aston', Mulligans Flat. They had nine children together. Three of them - Percy, Peter, and Silas - are in a Ginninderra school photo of 1905. One of them - Bessie - died at the age of three months in 1907, and hers is the first burial to have taken place at the Hall cemetery, which was proclaimed in 1883.

The wedding was reported by the Queanbeyan Age:

.....a quiet but pretty wedding was solemnized on Wednesday at Aston, the residence of the bride's parents, when Miss Edith May the fourth daughter of Mr Henry Gozzard was married to Mr George Shumack of Mayfield, the eldest son of Mr Peter Shumack of Canberra and grandson of the late John Gillespie of Horse Park. The Rev E Fox officiated. The bridegroom was accompanied by his brother Mr John Shumack as bestman and Miss Margaret Shumack sister of the bridegroom acted as bridesmaid. The bride who was given away by her father was attired in light brown cashmere trimmed with lace and straw coloured ribbons and wore a wreath of orange blossoms.

After the ceremony the party partook of a sumptuous repast. The health of the happy pair was proposed by Rev E Fox who spoke in eulogistic terms of the bridegroom. Amongst the wedding presents I noticed a beautiful wedding cake, the gift of the bride's sister, Mrs W Morris, a large EP Cruet from Mrs J Butler, a pair of pretty vases presented by Mrs N M Lazarus of Queanbeyan, table cover from Mrs P Shumack etc. The happy couple departed to their future residence Mayfield. [Queanbeyan Age 3.8.1895]

After marrying they settled at 'Mayfield' near Ginninderra, where George was farming, and later moved to Hall. Their house in Hall burnt down in 1908, leaving the family homeless. James McCarthy' generously offered them the use of accommodation at his property 'Glenwood': "Writing to the Goulburn Penny Post, the Ginninderra correspondent says: - I learn that immediately upon hearing the news of the destruction by fire of the residence of Mr. G. Shumack at Hall, Mr. Jas. McCarthy, the squire of Glenwood, placed an unoccupied house on his estate at Mr. Shumack's disposal rent free; which generous offer was promptly accepted. It is also said that the residents of Hall vied with each other in assisting Mr. and Mrs. Shumack by donations in kind to furnish their new home. Such acts of kindness in time of distress are worthy of the widest publication".[Queanbeyan Age, 4 February 1908, p.2]

According to White, George and Edith separated at some time during the first World War.

George worked with John ('Jack') Butler and their horse and cart, resealing and maintaining the Yass-to-Queanbeyan road and other unsealed roads in the new Federal Capital Territory. Butler died of blood poisoning in 1927, and George continued on his own until he retired some years later. George lived at Hall, next door to the Gillespies family home.

George and Edith May Shumack ⧉