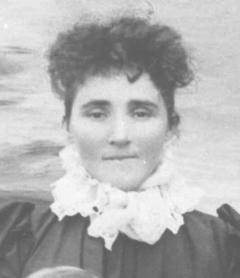 Edith married George Shumack in July 1895 with whom she had nine children. Three of them are identified in a 1905 photograph of the children of Ginninderra school. They settled at Mayfield near Ginninderra, where George was farming before their marriage, before moving to Hall. When her home was destroyed by fire in 1908, James McCarthy of 'Glenwood' offered them a place to live while they got back open their feet again.

George and Edith May Shumack ⧉