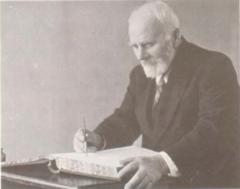 Springvale
Springvale was the Shumack family's homestead in the old Weetangerra Parish. In 1865 Richard...

Without Samuel Shumack's detailed recollections of the last half of the nineteenth century, Canberra's history would be much the poorer.

He arrived in Australia as a six year old with his bounty migrant parents Richard and Ann in 1856 aboard the Bermondsey. Richard was the last of seven Shumack brothers who emigrated to Australia, four of them settling in the Bathurst district. Richard first worked for the Campbells at Duntroon before moving to a position at Ginninderra estate for William Davis (Junior). The family lived at the Emu Bank outstation, which is now at the southern end of Lake Ginninderra in the Belconnen Town Centre.

He recorded the events of their arrival in his recollections.

We saw the Canberra Plain for the first time ... from a point close to where Wells Station homestead now stands ... Our journey from Sydney occupied three weary weeks, and we were happy to rest as guests of my Uncle John's wife and family [near modern-day Reid].

Of his childhood Samuel recalled:

"I did not attend school regularly until I was fourteen years of age. From the age of eight my time was fully occupied following the sheep. In 1865 [ie when he was fifteen] I attended the school at Ginninderra [St Pauls, The Glebe] for a period of six weeks.........At this time I could not write or cast accounts, although I was a good reader and had a good knowledge of geography. I quickly picked up the rudiments of arithmetic, but had to leave school to assist with our farming".

This was of course the bane of the rural teacher's life......

Samuel reported the tension with Davis concerning their decision to take advantage of the 1861 land reforms to become free selectors and set up their own farm at Weetangerra called Springvale. He wrote:

William Davis - who was father's employer and the squatter on whose land we selected - has 20,000 acres, excluding some thousands of acres of Crown land for which he paid very little, yet he resented our efforts to strike out for ourselves and laughed at what he derisively called 'Shumack's Folly'. 'Three years', he said, 'will see Shumack and his family sadder and wiser, for shortage of water will drive them out.' His prophecy miscarried!

In 1893 Samuel married Sarah Winter - daughter of Buckinghamshire migrants, John Winter and Jemima McPherson. They had nine children together. One of them - Samuel (jnr) - later recalled:

"When father took over the Weetangera Mail Run from the Clarks [Ellen Clark was the Weetangera teacher 1894-1920] the pay was ₤12/10/- per YEAR and it had been set at that for a long time. At Mrs Clark's suggestion he applied for an increase, and with the help of our local member it rose to ₤15!.....
......David Shumack was my brother and he 'ran the mail' as it was termed, for quite a while. I accompanied him on one occasion when he called at the One Tree Hotel at Hall, for a bottle of brandy for Mrs Bill Webber - then living in John Shumack's former home. Mon Lazarus was the 'mine host' at that time and he brought me a glass of lemonade as I waited in the sulky. He was known as 'Old Mons' " (White, p.335)

Further information on the Weetangera postal service can be found here

Evidently Samuel developed a love of both reading and writing - in spite of his minimal formal education. White records:

Samuel enjoyed reading, and during the course of his life he purchased the libraries of Rev P.G.Smith and Frederick Campbell, as well as a Campbell bookcase. He had in excess of 2,000 books in his own library eventually...." (While, p.331)

Along with all his neighbour's properties, Springvale, by then a farm of around 2,000 acres, was resumed by the Commonwealth government in 1915. Shumack left the district and moved to Hebden, near Singleton, NSW. On the very day he left the property he was severely injured in an accident and was forced into a more sedentary retirement in which he wrote his memoir. However, Shumack had always been widely read and interested in writing and may always have been likely to have become Canberra's first local chronicler, despite his accident and change of circumstances. His 488-page manuscript of recollections has become a critical source for the early lives of the residents of the district from his arrival as a child in 1856 until after the turn of the century. While his work contains many minor chronological inconsistencies and, at times, appears contradictory in some of its details, it is nevertheless an invaluable primary account which brings to life Canberra's pioneering families. In particular, it provides the rare perspective of the smaller farmers and free selectors who emerged as the driving force of the the social landscape of the 1860s.

The Queanbeyan Age gave a full report of a banquet held at 'Springvale' for the Weetangera Cricket Club in 1910:

On June 24th the members of the above club held a banquet and social at the residence of Mr. Samuel Shumack, the worthy president of the club, who very kindly placed his residence at the disposal of the committee for the occasion. The banquet was in honour of the ladies who so generously catered for the club members throughout the season. At 8 p.m. the chairman (Mr. E. G. Crace) explained the object of the gathering, at the same time extending a very hearty welcome to those assembled.

While the banquet was in progress a musicial programme was carried out, Miss Mima Shumack playing a very fine piano overture. Mr. Crace, in proposing the toast of the King, referred to the recent national loss by King Edward's death, but he believed King George would also make a model sovereign. The toast was most loyally honoured. Mr. S. Shumack proposed the toast of "The Ladies," and eulogised them for taking such an interest in the sport. It was owing partly to them that their club had prospered so well. He was pleased to say the members had at all times conducted themselves in a true and sportsman-like manner, and glad to note the absence of even an improper word on the field of play. If all the ladies took an interest in cricket, like the guests of the evening had done, he felt sure that there would be many more successful clubs in existence than at present. The presence of the fair sex on the field always tended towards the uplifting of the sport.

He asked all present to be upstanding and drink to the toast of " Our Guests." The toast was enthusiastically drank, accompanied with musical honours. Mr. D. Winter very suitably responded on behalf of the ladies. Mr. Harpham gave the toast of "Our Captain " Mr. Sam Shumack, coupled with the name of the vice-captain, Mr. M. O'Brien, sen. He was proud to play under the captaincy of. Mr. Samuel Shumack, and felt honored at being permitted to do so, as he was a true sport and a gentleman all the time. He felt that every bowler knew to his cost that when their captain once got."set" at the wickets, it was the hardest task to knock the wickets down. In Mr. O'Brien they had another good sport whom he considered one of the most consistent bowlers of the district, and the best trundler in their team. The toast was enthusiastically honoured, both gentlemen ably responding.

Mr. W. Webber, in a very able speech then proposed the toast of " The Visitors'" coupled with the Gininderra Farmers' Union. As secretary of the club he thanked the visitors very much for assisting to make the function such a decided success. He also referred to the good work the Gininderra Farmers' Union were doing, the President of which had so ably presided over the gathering that night. Mr. Crace took a deep interest in the Union and anything he could do to advance its progress was cheerfully done. As many present that evening were members of the Union, 'he had no hesitation in coupling the toast with that of the visitors, knowing full well it would be well received.

The toast having been enthusiastically received, Mr. Crace responded on behalf of the visitors and members of the Farmer's Union. He was pleased indeed to be present that evening, and felt honoured by the hearty response they had given to the toast. As a visitor he congratulated the committee of the cricket club on the splendid style their function was carried out. It was certainly unique, but yet very successful. As a cricketer he had very little time to indulge in the good old manly sport. He thanked Mr. Webber for coupling the Farmer's Union with the toast, and explained the objects of the Union, what it had done, and what it was endeavouring to accomplish. He mentioned that on October 3, it was their intention to hold a show at Gininderra. and invited all present to assist as far as possible in making it a great success. He then called for three cheers for Mrs. Shumack which were lustily given.

The following programme was then rendered :-Pianoforte solo, Miss Mima Shumack; comic song; Mr. Middleton (encored); song, Miss A. Murty; patriotic song, Mr. S. Kilby (encored) ; comic song, Mr. Glasson; pianoforte solo, Miss G. Clarke; jig and-step dance; M. and A. O'Brien; song, Miss Vera Curran.; violin solo, Mr. Gallagher; song, Mr. Curran; song, Mr. Webber. The accompanists were Miss Mima Shumack, Miss Annie Murty and Mr. Gallagher.
The room was then cleared and dancing indulged in till daylight. Mr. M. O'Brien jun., ably carried out the duties of' M.C., and proved himself to be the right man in the right place. At one o'clock supper was partaken of. Before dispersing Mr. Webber, on behalf of the members of the cricket club, thanked Mr. and Mrs. Shumack and family for the enjoyable evening they had spent, and referred to their many excellent qualities, and concluded by wishing them every success in the future. In responding Mr. Shumack eulogised Mr. Webber for the work he had performed as secretary of the club, remarking at the same time that in a great measure the success of the evening's entertainment was due to, his energy. " About 70 persons were present and one and all admitted that it was the best entertainment ever, held in the district. .
[Queanbeyan Age, Tuesday 19 July 1910, p 2]