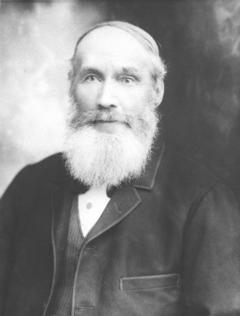 Edmund Ward came to Ginninderra to work for the Davises as the horticulturalist at Palmerville estate in the 1850s. As such, he was one of the first professional gardeners of the ACT and is credited with introducing some of the first European plants and cultivars into the district.

Ward was born in 1826 in Kibblesworth, Durham. His parents were George Ward and Elizabeth (nee Miles). He migrated to the colony as a bounty migrant, probably after his father's death in 1854 His father, George, was a blacksmith and, in the 1841 England census, young Edmund is listed as his apprentice. It is speculated that Ward may also have served in the capacity of de facto blacksmith at Palmerville upon his arrival. He is the first person recorded in the district with any formal training as a smith, but this does not mean that he actually worked as one.

Once settled at Ginninderra, he married Margaret Ward [Collins], an Irish servant, in 1857. Twenty years later, the Wards selected land for a farm and built a timber homestead, known as Nine Elms and established a very impressive 'model garden' and nursery (Ginninderra Nursery). The hill to the north of Nine Elms, now known as Harcourt Hill, was originally known locally as Ward's Hill. In 1874 before acquiring Nine Elms, he had selected two Portions (9 and 10) on the east of and including Halls Creek, in sum, 107 acres, and then two smaller adjoining 'suburban' portions on the opposite side of the creek, within the boundaries of the newly surveyed township of Hall. These Portions 193 and 194 were purchased at sale in Queanbeyan on 28 July 1886. A new cottage was built in 1886:

Edmund Ward was active in local politics, supporting the Protectionist cause and hence, the member for Queanbeyan, Edward O'Sullivan. He served as vice-president of the Ginninderra Protection Union in the 1890s. The Protectionists (later led by Prime Ministers, Barton and Deakin) advocated protective tariffs and were most popular in Victoria and rural NSW.

Margaret and Edmund's only child, Millicent, was born in 1858. She married George Harcourt in 1880, and when he died in 1893 she went on to run the neighbouring 685-acre Deasland property on her own.

News reached town on Wednesday of the death, that morning, at his residence at Gininderra of Mr. E. M. Ward, one of the old identities of the district, at the advanced age of 77 years. For some time past the old gentleman had been ailing, and for some days before the climax was reached was so low that little or no hope could be entertained that he would rally, though his medical advisor, Dr. Blackall, was in frequent and close attendance on him.

Mr. Ward was a resident of nearly 50 years' standing. His first engagement in this district was as gardener to Mr. William Davis, former owner of Gininderra. Mr. Ward was a professional gardener, and not only at Gininderra, but elsewhere in the town and district, proof of his knowledge and skill in his profession are still to be found. In his late years he retired from his profession and devoted himself to sheep farming, though as a pastime, and for his domestic uses he still maintained his model garden at 'Nine Elms', his latest home.

He was of very retiring habits, and seldom or ever took part in public matters or public movements. He leaves behind him an aged widow and an only daughter, Mrs. Harcourt, widow of the late Mr. George Harcourt, J.P., of Gininderra. The funeral took place on Thursday, the remains being interred in the burial ground attached to St. John Baptist's Church at Canberra. The Rev. P. G. Smith, M. A. officiated, and a large cortege followed the coffin to the grave, including all the leading residents of Gininderra and thereabouts. The casket was a handsome cedar one richly mounted with black and bore the following simple inscription "Edmund Miles Ward; died July 7, 1903, aged 77 years." Mr. Henry Lazarus carried out the funeral arrangements.