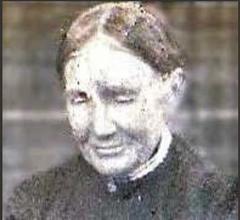 Eastview
'Eastview' on Gundaroo Road, Mulligans Flat was farmed by the Cavanagh family until it was...

Fairview
After the land reforms of 1861, Thomas Cavanagh acquired land west of One Tree Hill, Parish...

One Tree Hill
The rich early history of Australian's national capital is in part a story about surveyors...

Strayleaf
'Strayleaf' on Gundaroo Road, Mulligans Flat was occupied by the Cavanagh family from the late...

The Cavanaghs became synonymous with the Mulligans Flat area, even though they first selected land at One Tree Hill.

Mary Logue was the first child of Irish immigrants, Brian and Margaret (nee McAlroy; post Margaret Crinigan), born at sea on the ship 'Margaret' in March 1841, on the last days of their voyage out to New South Wales. Her birth was registered at Parramatta on arrival.

The Logue's second of six daughters, Margaret, was born at Murrumbidgee in 1843 and the family then moved to the Duntroon Dairy in the 1850s.

Samuel Shumack wrote – "When he arrived in Duntroon in 1856 Brian Logue and his family had charge of the dairy. He had six daughters and one son, and the dairy was a model of cleanliness and efficiency. Early in 1857 the Logue family left the dairy and took a farm at Canberra.

Patrick Cavanagh married one of Brian Logue's daughters and both were highly esteemed.

In later years I had good neighbours around me, but none better than this grand couple".

Mary and her sisters received some education at St John's schoolhouse.

In the late 1850s, Mary was working as a domestic servant for Reverend Smith at his parsonage at Canberry, while Patrick was a farm labourer throughout the district.

Mary and Patrick then farmed a small farmlet at 'Springbank', until around 1863.

They had a successful marriage with twelve children, although one died in infancy.

After the land reforms of 1861, her father-in-law, Thomas Cavanagh, selected a small plot west at One Tree Hill and slowly built up this holding into a prosperous farm - 'Fairview'. This was sold to Samuel Southwell after Thomas's death in 1871.

Patrick and Mary established their own farm further east at 'One Tree Hill' and raised their family there until the late 1890s.

Mary acted as midwife around the district and later delivered most of her grandchildren at 'Strayleaf'.

After the recession of the 1890s, "One Tree Hill' was sold to the Rolfe and Gillespie families and the Cavanaghs moved to Mulligans Flat.

Their son Michael and his wife Ethel, with Patrick and Mary, Jane, Mary and Ernie(Aaron) farmed 'Eastview', whilst Clarence farmed at 'Strayleaf' over the road. The other children left the district.

"A highly respected resident of Mulligan's Flat passed away on Sunday in the person of Mrs Mary Cavanagh Ginninderra at the age of 80 years.

The deceased lady was born at Canberra and resided in the district the whole of her life.

She was a fine character, generous and charitable and leaves a large circle of sorrowing relatives and friends".

Michael and Ethel continued farming on 'Eastview', but when Michael died childless in 1937, Mary's grandson Ernest, who had moved down from Queensland at a young age and grown up on 'Eastview', took over 'Eastview.

After Brian Logue died, his widow Margaret married John Crinigan in 1863 and they are thought to have lived at Margaret's cottage at Canberry.

John's only surviving daughter, Eliza Jane, married in 1867 to Duncan McInnes and they were given Stone Hut at their marriage by her father, and lived there until 1875 when they move to Hall. Some of the 'Stone Hut' paddocks, Mulligans Flat later formed part of Clarence Cavanagh's 'Strayleaf'.