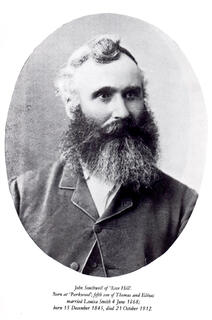 Parkwood
The Parkwood Home of Thomas and Mary Southwell Southwell Family Society In 1863 at the age...

Rose Hill
Rose Hill was established by John Southwell, who acquired Portions 68 and 69, Parish of Ginninderra...

The postal wars: Ginninderra vs Hall ⧉ (PDF 1.3 Mb)
An article on the struggle between the established settlement of Ginninderra and the new village of Hall over the location of postal services, 1859-1962.

Son of Thomas Southwell and Eliza Southwell, John Southwell was born on 15 December 1845. His wife, Louisa Southwell, nee Smith, was the daughter of Edward Smith and Mary Smith (nee Kilby); they married on 4 June 1868 and went on to have a family of seven : Albert, Eva Annie, Amelie Alma (Millie),William Shelton, Raymond, Sidney Roland and Edward John Thomas.

In his younger days he worked on his father's property 'Parkwood' but he soon acquired land of his own. John learned to do all the things required of a successful farmer early in life and he demonstrated his prowess as a ploughman at the early ploughing matches organised by the Canberra and Ginninderra Ploughing Match Association. He was later active in organising ploughing matches conducted under the auspices of the Ginninderra Ploughing Match Association, the first of which was held on the ground opposite the Cricketer's Arms Hotel in 1886.

He took a prominent part in community and political affairs being a strong supporter of the Ginninderra Protection Union of which he was at one time treasurer. He was a member of both Queanbeyan and Ginninderra Free Selector's Associations and the Ginninderra Pastoral and Agricultural Association, which unsuccessfully tried to organise a local show in 1889. At a meeting in Queanbeyan in 1889 to consider the advisability of setting up a flour mill he was elected to a committee, which eventually resulted in the establishment of the Queanbeyan Roller Flour Mill. In 1894 John chaired a meeting concerning the proposed establishment of a creamery at Hall, a project which came to fruition in the following year.

In 1872 when a school was established in the newly erected St Francis Roman Catholic Church at Ginninderra an application was made to convert the school to a provisional school with Government assistance. The persons suggested for the school board were all Catholics and the inspector of schools considered this an unsatisfactory arrangement for a Government school. He recommended instead that the school board should comprise the undermentioned persons and this was later approved:

He added a footnote that John Southwell had recently selected near the school and would shortly reside there. This selection must have been part of the property which John named 'Rose Hill', where he resided for some years.

Though he prospered for some years after his marriage, John Southwell suffered setbacks in the years l88l and 1882 which forced him into insolvency. Being a man of courage and strong principles he objected strongly when the owners of large stations began to fence off roads that had been regarded as public roads for many years. When Frederick Campbell, in 1881, placed a fence across a road which had long provided access to the 'Parkwood' area John and a number of others confronted Campbell at the site of the obstruction and demanded that the road be reopened. When Campbell refused, John Southwell pushed him aside while another member of the party cut down the fence. Campbell instituted legal proceedings choosing to take the matter to the Supreme Court though it could have been dealt with in a lower court. He claimed ₤1000 damages for assault and was eventually awarded ₤50 damages, but John Southwell had to meet substantial costs, the case being heard in Sydney. The latter had the sympathy of almost all the local community as the obstruction of the roads affected nearly everyone. The Ginninderra Protection Union, which strongly supported John, made a substantial contribution towards his costs on this occasion.

In the following year he was again at loggerheads with the owner of one of the large stations - this time Edward Kendall Crace of 'Gungahleen'. Crace served him with a writ in the Supreme Court for damage to property and trespass on the road leading from Ginninderra to Parkwood after he had broken through a fence across that road. Crace was awarded only a farthing damages, but John Southwell faced ruinous costs which resulted in him being declared insolvent. In an obituary twenty years later the 'Queanbeyan Age' commented:

...after he had attained a degree of substantial prosperity he suffered a severe reverse which men of less force of character would have avoided by compromise or less stubborn measures.

His stand was not taken in vain however, as the Ginninderra Protection Union and others continued the battle against road obstruction. Crace's fences were burnt down or otherwise removed on several occasions and eventually it was officially acknowledged that some roads had been illegally closed by the large station owners.

Despite the setbacks he suffered John was able to re-establish himself and he was one of the first to purchase allotments at the village of Hall. He erected the first building in the village and opened the post office in 1888. He conducted a store in that building with the assistance of his daughter, Eva Annie, who later became Mrs William Henry Jones. He also became the owner of 'Rose Hill' property at Ginninderra, and for some years occupied 'Willow Bank' farm on the Molonglo river, four miles from Queanbeyan also known as the 'Honeysuckle'. He soon disposed of the store to his younger brother Benjamin Roffe Southwell, and he built another residence 'Ottocliffe' at Hall. This house was replaced by another (also known as 'Ottocliffe') on a new site a little further back from the main street of the village after it was destroyed by fire in 1906.

John Southwell became a Justice of the Peace and sat as a magistrate on the Queanbeyan Bench. Though his education was limited he often wrote long letters to the editor of the Queanbeyan Age, one such letter being in defence of landowner magistrates who were accused of bias when they sat on the bench in cases of fellow landowners being prosecuted for failure to destroy rabbits on their properties. After he established his residence at Hall he took an active part in village affairs. According to the Queanbeyan Age he chaired the inaugural meeting of the Progress Association which was formed at Hall in November 1901. Some years later he performed the opening ceremony at a social in the new hall erected in the village by George Kinlyside in 1907. He had taken an active part in church affairs from an early age being an original trustee of both Parkwood and Wattle Park Methodist Churches. He had a good singing voice and he and members of his family were prominent for many years at Band of Hope concerts and in the church choir.

After John's death on 2l October 1912 the Ginninderra correspondent of the Goulburn Evening Penny Post wrote in his praise:

By the death of the late John Southwell, J.P. the village of Hall sustained the loss of one of the its most worthy and esteemed residents. He was a keen fighter in politics first as an ardent protectionist but in later years as a prominent supporter of the Liberal Party. It was he who, with a few other ardent protectionists, ably assisted Mr James Gillespie of Elm Grove several years ago in arranging the holding of a protectionist conference in Yass, and although the project at the time was ridiculed by the 'Penny Post' and other free trade papers, it eventually resulted in the formation of the great National Protectionist Association, which later on materially assisted bringing the late Sir George Gibbs and his party into power.

Louisa and seven children survived him. Louisa died on 1 December 1926 and is buried with her husband in the Hall cemetery.