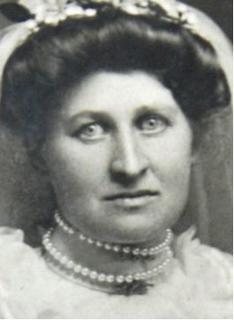 Rose Hill
Rose Hill was established by John Southwell, who acquired Portions 68 and 69, Parish of Ginninderra...

Born on 13 October 1844 in Ramsay, Huntingdonshire, England, the daughter of Edward Smith and Mary Kilby, Louisa married into the well-established Southwell family of Parkwood near Hall when she wed John Southwell on 4 June 1867 at Parkwood Church, Gininderra. She gave birth to seven children - Albert 1868, Eva Annie 1869, Amelia Alma 'Milly' 1871, William Shelton 1873, Raymond 1875, Sydney Roland, 1879 and Edward John Thomas, 1881. Her husband erected the first building in Hall and opened a post office and store in 1888, farmed several properties in the Hall and Queanbeyan areas, served as a Justice of the Peace and sat as a magistrate on the Queanbeyan Bench. Louisa and John were both active in the community; Louisa taught Sunday School after it was established in association with the local Methodist Church at Bedellick in 1882. John Southwell died on 21 October 1912, leaving Louisa a widow.

On 16 July 1915 Louisa's son Raymond enlisted with the Australian Expeditionary Force (AIF) and served in France with the 3rd Reinforcements to the 8th Field Ambulance, the 5th Division Sanitary Section and the 5th Artillery Group. Despite being court martialled for possessing a camera with films which were confiscated by military authorities in France (and returned to him in 1926), he was promoted to Sergeant. Mentioned in Despatches for conspicuous service by Sir Douglas Haig on 16 March 1919, Raymond was discharged 5 September 1919. He was the only one of Louisa's five sons to enlist in the AIF.

On the 24 May 1916 the women of Hall founded a Red Cross Society branch under Louisa's presidency, with Mrs E. Brown as treasurer and Mrs George Southwell, secretary. The new branch organised a patriotic picnic and sale of gifts in November 1916. They raised £86/6/3 in their first year, made 67 articles of clothing and assembled 25 Christmas parcels for soldiers.

By November 1917 Mrs Helen Blanche Crace ('Blanche') had taken over the presidency, perhaps because by then Louisa was 73 years old and the demands of the work may have taken its toll on her health. She did, however, remain as vice-president. The group continued to be busy fundraising, knitting and sewing. In 1917, the 75 members raised £214/14/4 and contributed 188 items of clothing to soldiers at the battlefront or in hospital. During 1918-1919 the Hall membership had dropped to 69 but the branch raised £177/5/3 and made 296 articles of clothing, including shirts, pyjamas, socks, mufflers, mittens, gloves, balaclavas, hospital and kit bags, dusters, washers, pillow slips, handkerchiefs and bandages. They distributed funds to the New South Wales Red Cross parent branch in Sydney, the French Red Cross, the War Chest, to prisoners of war in Germany and Turkey, and to various special celebrations such as France Day. The group displayed creativity and a sense of fun in some of their fundraising ventures; in May 1918 the Goulburn Evening Penny Post reported that the Hall Red Cross had held a fundraising cricket match between the ladies and the gentlemen, with the men handicapped by wearing hobbles and batting with pick handles ('Gininderra', 1918, p. 2).

The branch gave up active work in October 1919 - war had ended so there was no longer the need of the previous years. The Hall schoolteacher Charles Thompson penned a tribute to the women that was published in the Queanbeyan Age and Queanbeyn Observer on 28 October 1919 acknowledging the challenges of such a group in a rural area. He wrote that many of the Red Cross members had been compelled to travel eight miles to attend meetings and had to convey provisions in all weathers. 'Nevertheless', he wrote 'this noble band of lady workers were fully determined that the brave lads who have dared their all for the sake of King and country, should not be wanting in comforts and necessaries if their exertions and nimble fingers could supply the want'. When the Hall branch closed it donated the remaining balance of £50 to provide a four-bed ward in a soldiers' convalescent home ('Gininderra', 1919).

Louisa moved to Junee, New South Wales to be near her children William, Edward and her daughter Milly. She died at Junee on 1 December 1926 and was buried with her husband John at Hall cemetery in the Australian Capital Territory.