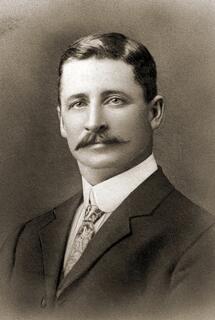 James Vincent was the fifth and youngest child of Joseph and Mary Ann Hibberson (nee) McCarthy; Mary Ann was sister to James (Jnr) and William McCarthy who ran the Glenwood estate after their father died in 1869. Born in Penrith, James Vincent moved to Glenwood around 1900 to assist his uncle and became the station manager. After James McCarthy's death in 1911 the Hibberson family bought the estate, and for the next thirty years James Vincent was also a proprietor, although Glenwood was progressively reduced by subdivision and sale.

In 1903 he married Bridget, one of seven daughters fathered by Edmund Rolfe of nearby 'Gold Creek'. (His older brother Joseph James had married another of the Rolfe daughters, Maria, in 1884, but she died in 1903, the year of Bridget's wedding.) James Vincent and Bridget went on to have four children. When his uncle, James McCarthy Junior, died in 1911, James Vincent was a major beneficiary from his estate. As well as directing the trustees to invest £4,000 and pay the net income to his nephew for life, he also instructed that he receive a third of the residue once this and other disbursements were made.

James earned a good reputation as station manager and active participant in the life of the local community. Glenwood was recorded in Yewens Directory of 1900 as growing wheat and oats, having an orchard and grazing. In 1914 it was reported that he was growing very fine grapes - 'the variety being Muscat of Alexandria, grown under irrigation. All bunches were 2lb to 3lb and free from defect of any kind' [Queanbeyan Age 3.4.1914 - the writer confesses that 'a sample was provided.... ] The following year he was elected to the Pasture Protection Board and was a Vice President of the Ginninderra Farmer's Union. James Vincent became highly regarded for his stock-breeding success. In 1920 the Age reported : "Mr JV Hibberson whose flock of stud sheep are spoken of so highly in this and the neighbouring districts secured the splendid price of 3/- per lb for the clip from these sheep. Good for Glenwood" [Queanbeyan Age 16.11.20].

James Vincent died at the age of 66 years in St Vincent's Hospital Sydney after a three month illness. "He was a great lover of horses, especially so of the trotting strain, and excelled in their management. A patron of all clean manly sport, particularly cricket, and excellent shot, he always figured prominently in the old time hare drives and pigeon matches. He rendered great assistance as a member of the committee in making the Ginninderra Shows the wonderful successes they were, not only in giving his time and labour but his purse was always freely opened to assist the cause....." [Queanbeyan Age 10.5.1932]. Bridget outlived him by thirteen years, passing away in 1945. They were both interred at Queanbeyan Riverside Cemetery.

The death occurred at St. Vincent's Hospital, Sydney, yesterday afternoon of Mr. Joseph Vincent Hibberson of Glenwood Station, Hall. The late Mr. Hibberson, who was 67 years of age, had been a resident of the Yass-Queanbeyan district for nearly 40 years. A native of Penrith (New South Wales), the deceased served his apprenticeship on the land at Glenwood Station, Hall, under his late uncle, Mr. James McCarthy, who acquired Glenwood more than 50 years ago.

In his youth, Mr. Hibberson was a cricketer of some talent, and played at Penrith with such players as Evans and Howell, who later played with the Australian XI. Widely known and respected in the district, Mr. Hibberson was a sheep-breeder and was also a member of the Yarrowlumla Shire Council. The deceased leaves a widow and three daughters, Misses Patricia, Ursula and Claire, one son, Mr. J. B. Hibberson, and two sisters, Mrs. Cox, wife of Major Cox, of Ashfield, Sydney, and Miss Hibberson, of Randwick, Sydney. He was pre-deceased by two brothers, Joseph and William. The remains will arrive in Quean-beyan this morning, and the funeral will leave St. Gregory's Church for the Queanbeyan Cemetery at three o'clock this afternoon. [Canberra Times, 10.5.1932, p. 2]