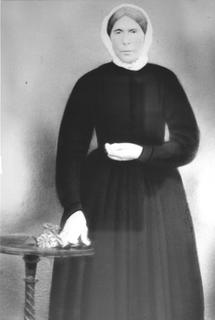 Margaret Byrne and her future husband William Ryan were both natives of Moycarkey, County Tipperary. William, born in 1812, was the nephew of 'Old Billy Ryan' who was sentenced to transportation for 'insurrection' in 1823. Old Billy, having gained his certificate of freedom, had sent word to his brother Timothy from the small farm he was setting up at Mulligans Flat, telling him of the great opportunities that Australia offered. It was Timothy's son who took the bait, and he and wife Margaret embarked for Australia on the 'Orestes' on 6 January 1841 after marrying on 11 September 1840. Margaret is listed as a dairymaid in the ships records.

They entered Sydney Heads on 14 May 1841, and were soon on their way by horse drawn spring cart, to Ginninderra. It was customary for new settlers in the Limestone Plains district to be taken to their destinations by a teamster on his return trip from Sydney, loaded with station supplies. The journey would take around three weeks. Reunion with William's uncle at his modest hut at Mulligans Flat would have been very welcome.

Margaret gave birth to six children between 1842 and 1854 - (John (1842), Timothy (1844), William (1846), Edward (1849), Margaret (1851) and Martin (1854). While she could read, but not write, she was a staunch catholic, and made sure that her children followed the church's teachings. She was also known as a hard-working and capable woman, amply demonstrated when William met with a fatal accident in 1857, leaving her at the age of thirty-nine a widow, mother of six, with a farm to keep going. Unusually, she did not re-marry, but became a farmer in her own right. She carried through the negotiations to purchase the leases that William had begun before his death, securing portions 42, 43 and 44, Parish of Goorooyarroo in 1857 - a total of just over 100 acres. Over the years a further seven blocks were added, though not all stayed in the Ryan family. An 1871 portion plan shows Mrs Ryan's house, stables, garden, a smithy, a small home paddock and yard, and a gunya in a close by clearing.

By 1878 all but one of her children had married and gone their own ways, and it appears that she relinquished control of the property to her son Edward and went to live with her daughter Margaret (McMahon) in Tharwa. She passed away there on 29 April 1898 at the age of eighty.

"This strong Irish lady survived the rigours of life in the Australian bush and on to outlive two of her sons. The names of William and Margaret Ryan can truly be counted among the early pioneers of Australia and they left for their descendants a proud ancestral heritage" (Bofinger, 11)