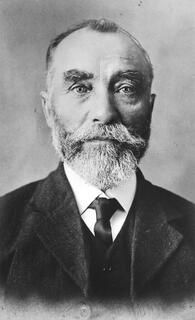 David Boon, described as an agricultural labourer, arrived in Sydney in the ship 'John Bunyan' on October 27, 1857. The 'John Bunyan' weighed 1440 tonnage and was built in St Johns in 1856. On board there were 109 males and 121 single females. 230 were married. On the voyage there were 6 births (3 male, 3 female) and 6 deaths ( 3 male 3 female). The ship was under the command of Master N.B.Shune and surgeon Edward Kearny .

The son of David and Lucy Boon [nee Wooley], he was born at Ramsay, Huntingdonshire, England, on January 1, 1836. After his arrival in Australia, David went first to Campbelltown area. There he married Mary Ann Plummer, daughter of Levi Plummer and Frances (nee Guthridge) on April 9, 1860. It's not known how he and Mary met. They may have lived close to each other as Mary's residence was listed on their marriage certificate as Gledswood, a very well known homestead, she was a housemaid. Four children were born at Campbelltown before the Boons moved to Weetangera about 1870, five more being born in the Canberra district between 1871 and 1881.

By 1875 David had established himself as a farmer and in that year he and Shelton Smith (son of Edward Smith and Mary Kilby), also of Weetangera, were mentioned as growing 'perhaps the finest wheat produced in Australia'. He was a keen participant in the local ploughing competitions; an 1879 report says that he Chaired a meeting of the newly formed Canberra and Ginninderra Ploughing Association at Shumack's Hotel Canberra (today, the 'Old Canberra Inn') and was elected to the committee [Goulburn Evening Post 16.8.1879]. In 1874 he won first prize of ₤4 in the second match for colonial made ploughs at the annual ploughing matches in the Jerrabomberra Estate [Queanbeyan Age 29.8.1874].

He was also an active citizen in both church and political spheres. In 1889 he Chaired an election meeting at the Cricketer's Arms Hotel at which EW O'Sullivan MLA spoke. [Wizard's Notes Goulburn Evening Penny Post 29.1.1889]. Two years later he seconded a motion of confidence in Mr EW O'Sullivan MLA after he had addressed a meeting of his constituents at the Cricketer's Arms Hotel on Thursday evening [ibid. 7.4.1891]. The Boons were leading members of the Wesleyan Church and David taught and acted as superintendent of the Sunday school at Weetangera Church.

In 1881, with his wife and some of the children, David Boon left the district and moved to Ashfield where he died in 1912. His wife Mary Ann predeceased him on August 10, 1906.

Frederik, May and Ada Boon. Children of David and Mary Anne Boon ⧉