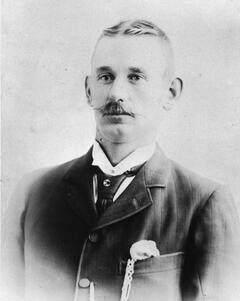 John Read was the son of Hugh Read (1838–1894) of Tintinhull, England UK and Eliza (Elizabeth) Shumack (1840–1907) of Castletown Berehaven, Cork, Munster, Ireland.
Hugh arrived on 'Golconda' in 1857, and married the sister of his employer in 1862 – Eliza Shumack.
Eliza Shumack, her parents, John and Margaret, her brother Joseph and her uncles Peter and Joseph, had arrived in Australia on the ship 'Lascar' on 11/11/1841.

Hugh progressively acquired land and established his home 'Wattle Grove' on land adjoining the Ginninderra-Sutton Road. He engaged in farming and grazing pursuits and appears to have been very successful.

Hugh and Eliza had 10 children, with Margaret (who married Richard Maloney) being the second in 1864 and John (who married Ellen Maloney) the fourth in 1868.

Hugh Read died on 2 September 1894 at 'Wattle Grove', Sutton aged 56 years and Eliza (Shumack) Read died in 1907. Both are buried in the cemetery at St John's church, with their son John and daughter Margaret.

John, or 'Jack', as he was better known, purchased the Old Canberra Inn on Yass Road and the land associated with it from his uncle John Shumack. This land was adjacent to Ellen's parents and brother, Richard Maloney who was married to John's sister Maggie Read. John did not seek to have the Inn re-licensed but used it as his home. It later became known as 'The Pines' because of the large pine trees which had been planted around it.

The Read family continued to operate the property as a farm, as evidenced by the fact that in 1898 John won a prize at the Agricultural show for his oat crop. John was also very active in the affairs of the district and was a keen sportsman. He undertook carrying work with his horse team and was well known for his farming activities.

John and Ellen had six children:

John died a comparatively young man on 18 December, 1917 and is buried with his parents and sister in St. Johns cemetery.

"Like his father before him, the deceased was one of the most advanced and scientific farmers of the district. His wheatlands and extensive areas of other cereal crops contiguous to his pretty little house at upper Canberra were the admiration of all capable judges and it was not to be wondered that he was invariably the winner of prizes at both Queanbeyan and Ginninderra agriculture exhibitions. Indeed Jack Read was classed amongst the most expert of his calling in this and the surrounding districts...."

Ellen, survived him by many years and continued living at 'The Pines' with her sons. She died on 7 April 1962, aged 91 years and is buried in the catholic section of the Canberra cemetery.

Her sons Robert and Thomas lived with her intermittently during that time and helped her with the farm. Three of her other four children settled in the Canberra district.
Jack Read built 'Strathnairn' Homestead in 1924 and later owned the Royal Hotel in Braidwood.

After Ellen died in 1962 her two sons Robert and Thomas continued to live at 'The Pines'. Robert died in 1966 and Thomas died in 1973. In 1974 it was bought by the Government who decided to restore it and convert it back to an inn.