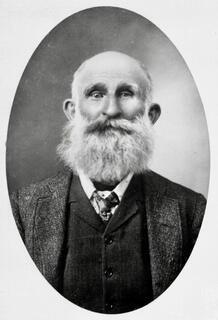 Duncan was born at Duntroon on 1 April 1844. The son of Scottish immigrants Gilbert McInnes and Mary McIntyre, he married Eliza Jane Crinigan (Jane) daughter of John and Maria Crinigan [nee Mansfield]. Duncan's mother died in 1856 only days after the birth of her 11th child. Aged twelve, Duncan was then employed with his older brother John (16) and Archibald (14) at Dirty Swamp, Kowen, until his marriage in 1867.

Duncan and Jane lived at Stone Hut, Ginninderra, a marriage gift from her father, John Crinigan, where their first four children were born:

It is possible Duncan was a dummy selector for McCarthy on part of his property at 'Glenwood', near Selection Creek. Duncan had to live there for three years to built a hut. Stones marked the spot.

Duncan and Jane McInnes had a further six children:

Duncan moved around the district as a shearer and farm labourer. Their small place on Ginninderra Creek (now conserved as the Crinigans Hut ruins in Wanderer Circuit, Amaroo) could not support a family. This land passed into the Cavanagh family, step-cousins of Jane. The ruin of the three roomed stone cottage Crinigan's Hut was entered on the ACT Heritage Register in 1994 after excavation by the Canberra Archaeological Society and family members and friends.

Duncan worked for Fred Campbell at 'Yarralumla' for over 18 years, as a boundary rider. In 1889 he was at 'Yarralumla' when his son Archie, aged fifteen, had to be treated for a hip problem after a fall from a horse; he was training to be a groom. Archie (J.A.) married Jane Mitchell of 'Homebush', Hall, and died 26 July 1962 in Queanbeyan. Archie became a boot maker and operated his business from his home in Morrisett Street in Queanbeyan. He and his wife are buried in the old Tharwa Road Cemetery Queanbeyan.

For some years Duncan operated the punt at Urriara Crossing. Their son John died there in 1905. After that they bought Barracks Flat at Queanbeyan. Duncan died on 5 November 1912 in the Queanbeyan Hospital. In 1918 Jane married again - to Charles Boyd - and moved to Kileevy at Harden in 1922. She died there in 1932. Duncan and Jane are buried in the Riverside Cemetery in Queanbeyan.

Like many locals Duncan occasionally appeared in the newspapers. He was at living at 'Glenwood' in 1875 when he was kicked in the stomach by a young horse 'he incautiously approached', at the One Tree Hill Pub. Another horse incident involved Duncan 'Magennis' in December 1862 when he was thrown from a young horse "with such violence", although he escaped "without breaking a bone or any worse injury". In 1892 at a hare drive on McCarthy's 'Glenwood' run Duncan was shot in the eye with several stray pellets – "which gives to prove that some at least of the shooters present were not as careful as they ought have been." In 1904 together with W. Rule, Mark Southwell and James McInnes, Duncan killed a "fine specimen" of an 8ft 4ins diamond snake, at the junction of the Murrumbidgee and Queanbeyan [Molonglo?] Rivers.

Duncan and Jane's daughter Kate McInnes was killed in 1891 near Ginninderra Falls after she was dragged by a horse she was leading by the bridle. She was only just 15 years old. Not all reports make interesting or happy reading. In 1896 Duncan appeared before the Queanbeyan Police Court charged with severely assaulting his 16 year old daughter Maria with a loaded whip handle. Found guilty he was ordered to be on good behaviour for twelve months. A happier report was of Maria at the annual shearers ball organised by James McCarthy at his 'Glenwood' shearing shed to celebrate the finish of shearing operations in 1895.

In 1883 Duncan unsuccessfully sued Gribble for agistment owing. The Courts in those times were obviously available to all for their grievances, at little cost. In 1902 Duncan unsuccessfully sued ('Captain') Samuel Southwell for libel over payment for a horse which Duncan had taken back. Witnesses included Edward Clarke, Richard Vest, Frederick Campbell and Daniel Gifford. Duncan mentioned that his cottage was about 10 miles from Yarralumla homestead.