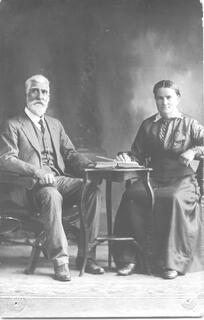 Stephen Brown was the first of fourteen children born to Thomas Brown and his wife Sarah (née Turk) He was born in 1832 in Sussex, England, and accompanied his parents and two siblings (Harriet and James) when they emigrated to Australia on the 'Duchess of Northumberland', arriving in Sydney on the 22nd of April 1838.

Travelling southwards from Sydney, the family spent some years in The Cowpastures district before settling permanently near Jerrawa Creek, forty miles west of Goulburn.

Stephen married Jane Stear, who was born in Cornwall, England in 1835, on 4th January 1853, and arrived in Sydney with her family on the 'Julindur' in 1849. Their children were:

Writing about 'Old Wesley Vale' in 1910, Rev F W A Roberts observed that 'the children of Old Tom Brown followed in their father's footsteps':

Among these is Mr Stephen Brown ....He is nearly 80 years of age, and has been a preacher for over 50 years, and still preaches. At the beginning of last winter he drove one very cold Sunday about 16 miles to fulfil two appointments, which caused erisypelas, and which confined him to his bed for weeks, but he was present at all the Jubilee Services and was proud of the part which his son, the rev. Alfred Brown took in the celebration..."