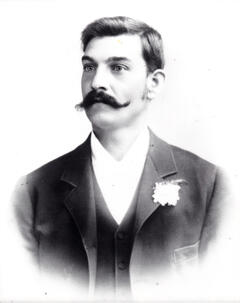 Ebenezer was the seventh of twelve children child born to Stephen Brown and Jane Brown [Stear] of Dalton NSW, in 1866. He was one of the five siblings to marry a member of the Southwell family, his bride being Elizabeth Southwell, daughter of Samuel Southwell and Harriet Bembrick, whom he married at Wattle Park church on 21 April 1897. At that time Ebenezer was recorded as a store-keeper, working with his parents at Wiseman's Creek, about ten miles north west of Oberon. Ebenezer was the first of the family issuing from Thomas Brown of Dalton ('Old Tom Brown') to establish a home in Hall , in 1900), where a number of his descendants are still resident. Ebenezer and Elizabeth had three children:

Ebenezer lived to ninety, passing away in 1956; Elizabeth predeceased him, dying in 1940. They are buried together in the Hall cemetery.

The (unpublished) memoirs recorded by his son Claude and wife Mabel include interesting reflections on his father Ebenezer:

'His first job was at a butchery at Yass where he drove the butcher's cart around the town. In those days the butcher sent his cart around to his various customers. The meat was kept in a covered cupboard arrangement and customers selected their meat from the van. Later father took a job in shearing sheds. At one time he spoke of working in the shearing shed at Yarralumla with Jim Kilby. It was while he was working around Hall that he met mother, who had been in service at Craces at Gungahleen. They were married at Wattle Park Church in 1896. The wedding breakfast was held at the old home at 'Cow Hollow'.

Soon after marriage, father, mother, Uncle Charlie (Mother's brother), and Aunt Annie (Father's sister) became partners in a general store at Wisemans Creek... a goldmining township a few miles from Oberon in the Bathurst district. Alf Southwell, a brother of Uncle Charlie's was responsible in a way for this partnership at Wiseman's Creek. Uncle Alf was a teacher stationed not far from Oberon at the time Uncle Charlie was married, and recommended that the general business at Wisemans Creek would be a profitable one and it was up for sale. At that time gold was being found in the district ....which at that time had a large population for such a small area. The business didn't turn out to be the bonanza pictured by Uncle Alf. Mother and father lived in some of the rooms of an old hotel, while Uncle Charlie and Aunt Annie had a house farther away near the Post Office. Father did most of the carting of goods either from Bathurst or Oberon. This meant that a lot of time was devoted to travelling by cart and horse along poor roads.

Father and Uncle Charlie with the help of mother and Aunt Annie conducted the business, the only store at Wiseman's Creek, sometimes using gold as a medium of exchange. Father often had to use a magnet when accepting the gold as iron filings could be mixed with the gold to increase the weight.

As often happened in gold mining towns, the metal becomes scarce and the population gradually dwindles. This happened at Wiseman's Creek and as a result it was unprofitable to trade. Hence our folk began to look around for a new business. Fortunately the store at Hall A.C.T. under the name of A.W. Flower was for sale and Grandfather [Samuel] Southwell anxious to get his folk nearer home, offered to help in the purchase of the business. Soon the partnership of Southwell and Brown decided to accept the offer of grandfather's and made preparations for returning to the home country as it were. Soon father, mother, Uncle Charlie, Aunt Annie, together with Dorothea, a baby, and myself left Wiseman's Creek and travelled by train to Yass to be met by grandfather in his buggy. Mother and Aunt Annie didn't see Wiseman's Creek again....Father, Dorothea and her husband, Harold Smith, visited the little township about 1928. They drove the new Buick car, the first long trip it had ever undertaken.

The store at Hall consisted of a single room like a hall, with a hip roof extending to a skillion at the rear. The walls were lined with shelves and counters were placed on three sides. The skillion contained the bags of bran, pollard etc. and boxes of unopened goods. At the rear of the main building were stables made of slabs and sheds for vehicles, which included a cart, a sulky and a buggy. A waggonette was used for carting goods from Queanbeyan.

I understand that for a while, both families lived together in a building not far away from the store. Later a new pisé building of four rooms on a block of land to the east of the store and not far distant was built. The soil for the building was carted from where the Hall park is to-day. The construction of a pisé building was reasonably cheap. This building of four rooms consisted of a front bedroom where father and mother slept, adjoining this room was what mother called the front room, where any visitors were entertained. It contained a sofa, a few chairs, a centre cane table with a crocheted cover, and photos on the wall. Later we had an Estey organ, on which Dorothea and Ross learned at one time. The two back rooms acted as a kitchen and a spare room......

I can still see my mother getting breakfast for us using an open fire for cooking and often in the light of a kerosene lamp, waiting for father who was at the stable feeding the horses in preparation for a 17 mile trip to Queanbeyan for goods. During the winter father bought rabbits and took them to Queanbeyan where buyers from the freezing works bought them. This trip sometimes done daily and at early and late hours was a most trying one, for mother as well as father, as it meant at times a four o'clock rising, on bitterly cold mornings. No refrigeration meant the work was done in winter.

During holidays or at special times we sometimes went to Queanbeyan with father in the waggonette. This waggonette was built by George Kinlyside, a very clever blacksmith who carried on his business just over the road from our place. At one time he made and patented a poison cart, which were much in demand throughout the state. Our waggonette was well built and with three horses in harness it looked very impressive, especially when father wore his cork helmet as he sat on the high driver's seat.

Mother was a good business-woman.....She attended to the sale and purchase of drapery and looked after the Post Office which was attached to the shop. Uncle Charlie was the official postmaster. Uncle Charlie also looked after all accounts and sent out the accounts. Sometimes mother went to Queanbeyan in order to meet the commercial traveller from Petersen and Boesen's, a firm in the City, and at that time situated in Barrack Street. Sometimes each one of us children was allowed to accompany mother to the city....Generally these trips were for the purchase of goods for the store.

The post office attached to the store took quite a deal of time, as there were a few outlying centres whose people had mail addressed to Hall. The telephone also required a deal of attention, as there were a few subscribers, some on party lines who had to be plugged in when calls were made. Letters were postmarked, tied, sealed and bagged for transport by coach to either Queanbeyan or Yass.

On almost every Sunday we attended the Wattle Park church, two miles westwards from Hall on the Yass Road......Sometimes we attended church twice on Sunday for the ordinary church services morning and night. Father drove the buggy and Uncle Charlie the sulky for the main service when the Minister officiated. At night the service was conducted by a local preacher and we walked to this, generally cutting through Murty's paddock via the back gate. Sometimes my father preached. Uncle Jim Kilby, Uncle Charlie Southwell, George Southwell, Captain Sam Southwell and others occupied the pulpit at various times

As early as 1895, before his family moved to Wisemans Creek, Ebenezer was the purchaser of a Hall allotment – '2 roods fronting Palmer and Hall streets, Ebenezer Brown, blacksmith [sic] , Hall, £6'. Only four of the seventeen allotments were sold, another going to his future business partner, Charles W. Southwell. [Queanbeyan Age, 13/7/1895, p. 2]

As well as his strong commitment to the Wattle Park church, Ebenezer was active in other community affairs. By some reports he was elected president at the inaugural meeting of the Hall Progress Committee' in 1901. Later on he became secretary of the Federal Capital Territory show, and vice-president of the Hall cricket club. In 1924 he and Elizabeth hosted a coming of age gathering for Ross, who had been an assistant in the Southwell and Brown store since his school days – and was to take over running the store from his father in 1934. Ebenezer lived on for two more decades before passing away on 30 November 1956.

A funeral service for Mr. Ebenezer Brown, aged 90 of Hall, was held at Wattle Park Methodist Church, where he had worshipped for the last 56 years. The service was conducted by the Rev. Dr. George Wheen and the Rev.H. Howe. The church was filled overflowing with some 200 people, most of whom had known Mr. Brown all their lives. Mr. Howe said Mr. Brown set a fine example to others.

Mr. Brown, was born at Dalton almost 91 years ago. He came to Hall in 1900. Shortly afterwards in partnership with Mr. Charles Southwell, he opened a general store which is now conducted by his son, Ross.

He joined Wattle Park Church in 1900 and continued as an active worshipper, playing a prominent part in community affairs. He was a foundation member of the ACT Pastoral and Agricultural Association.

Mr. Brown died at his home at Hall on Friday. A vital personality, he had been an inspiration to those who knew him. At the graveside Rev. Wheen said "We thank God for the life of this great servant of God." It was not known if Mr. Brown had a motto, but if he had, it could have been "Thou wilt keep him to perfect peace – the whose mind is staying in Thee; because he trusted in Thee," said Dr. Wheen.