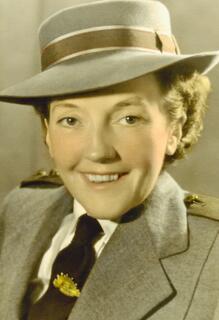 Mulligans Flat School
An initial application for a Provisional school was made in 1894, and a two acre site on the...

Strayleaf
'Strayleaf' on Gundaroo Road, Mulligans Flat was occupied by the Cavanagh family from the late...

Clarice Esther Cavanagh was the fourth child of Clarence Bede Cavanagh and Esther Anne (nee Smith) Cavanagh of 'Strayleaf', Mulligans Flat, and was born on 20 July 1913 (although often shown as 1915).

Clarice, known as 'Charl', grew up on her parent's farm 'Strayleaf' and attended Mulligans Flat school in her younger years and then Mt Carmel boarding school at Yass.

"When Charl reached the age at which she could apply for a drivers licence her father decided that her younger sister Pat should be the one to get the licence so that she could help on the farm, but she was too young. Not to be outdone Clarence took young Pat to the licence office with Charl's birth certificate. Pat was given the licence and it showed her as being two years older than she actually was. When it came time for Charl to get her licence she used Pat's birth certificate which showed her as being two years younger. Charl later changed the records to reflect the correct day and month, but kept the year 1915 - perhaps it made her feel two years younger, but it did throw some things out of sequence as the official congratulatory messages she received on her 90th birthday arrived two years after the event.

She wanted nursing as her career, but this wasn't supported by her father as he thought 'nurses smoked too much, drank too much and led a wayward life'. However, not long after that he experienced the support of nurses while in hospital and came to the conclusion that nurses were a fine brand of women and gave her permission to take up her chosen career.

She trained as a nurse at old Canberra Community Hospital at Acton from 1933 to 1937 and then worked at Gundagai and Harden before enlisting in the Australian Army in 1944. She stayed in the Army after the war and served overseas with BCOF in Japan from February 1949 to December 1952. She was then a Sister and Matron at the Royal Military College, Duntroon from 1953 until 1961 and served in Singapore and Malaya in 1963 to 1965.

She returned to RMC, Duntroon until she retired from the army in 1970, during the period that the army was actively involved in the Vietnam war.

In 1973 Sister Cavanagh, Lt Col (RL), was appointed to the Commonwealth Public Service and served as a civilian nursing sister in the RMC outpatients section until 1976.

In 1975 a considerable number of staff and cadets were affected with glandular fever and many required long periods in hospital. The number of in-patients was 429 and 7,699 outpatients attended sick parades.

When she was sixty-five she finally had time to marry to 'Gerry' - Arthur Gerrard O'Callaghan in Goroka, whom she had met in Japan, but sadly he died only two and a half years later.

She was awarded the Order of Australia (AM) for her services to nursing in 1976, and in 2005 the Commandant's residence at Duntroon was named 'Cavanagh House' in her honour.

'Sister Cav' died in 2006 and is buried at the Gungahlin Cemetery, after a funeral service in the Chapel of St. Paul, Duntroon attended by a number of her former cadets – 'boys' who she had looked after during training and their return from Vietnam, some of whom were pall bearers: