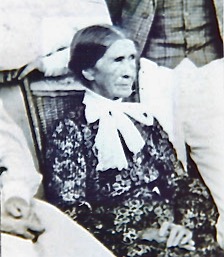 Margaret McAuliffe was born in 1833 in Newmarket, Co. Cork, the second of nine children born to Thomas McAuliffe (Senior) and Mary McAuliffe. Margaret was about 11 years old when the family arrived in Australia aboard the Herald in February 1845. In the family's first few years in Western Sydney she was probably too young to work, though she may have gone into service at 14 as her older sister Ellen did on arrival in the colony.

By the time the McAuliffes came to the Jeir area in 1849/1850 she was certainly of working age, and soon after their arrival both she and Ellen were working as maids at Yarralumla station, the property where Australia's Government House stands today. In March 1850 she and Ellen were hired by Yarralumla's then owner, Terence Aubrey Murray, at £25 per annum.(Source, S M Mowle, Retrospective Journal, held by Mitchell Library, cited by Cross and Sheedy, Queanbeyan Pioneers, 1983, p192).

Margaret did not work long at Yarralumla before she married, on 13 Januarly 1851, the much older William Lee, a convict from Limerick who had been transported for highway robbery in 1829 and granted a Conditional Pardon in 1843. Despite this, he continued to work for Murray as a stockman and overseer. At about 40 years of age in 1850, he had perhaps decided it was time to settle down. Margaret was 17, or just turning 18 (we do not know her month of birth).

Patricia Clarke's A Colonial Woman gives extracts from Mary Braidwood Mowle's diary, including the following (p112):
'Friday 17th' (January, 1851). '... I went over to Yarrowlumla to see Margaret. Just as we got to the white gate Lee who was with us managed to tumble off his horse which frightened me excessively, however he was not much hurt. Went in, saw all Margaret's bridal finery and gave her plenty of good advice....'

At some time not long after they married, William became the proprietor of St Patrick's Inn, Crawford St, Queanbeyan.

Margaret's first child was born in 1852 though he died the following year. Thereafter there were nine more children, the last, Kate, born a few months after William's death in 1867. One of these, Catherine, died aged 6 in 1866, the start of life unravelling for Margaret, who was widowed the next year.

We know little of Margaret's life until William's death in 1867, after which she became quite a local celebrity.

On William's death, Margaret was provided for by any proceeds drawn from William's property, but she did not inherit the property itself. For some reason, perhaps in repayment of a loan, William's property (several Queanbeyan blocks of land, and St Patrick's Inn) was left to Augustus Gibbes, by then owner of Yarralumla and his heirs, and he was made Executor of William's will in this respect (Margaret being Executrix and guardian of the 'infant children' provided she did not remarry). Since she was only in her early 30s when William died, this seems grossly unfair by today's standards, but it was a very common provision in those days to ensure that a man's children, not a new husband, got the proceeds of his labours. Gibbes disclaimed this property in 1880, by which time the three oldest surviving children, and most notably eldest surviving son John, had reached majority. At that point Margaret owned the various blocks her husband had owned at his death, as well as St Patrick's Inn.

Margaret became the licensee of St Patrick's Inn on 13 August 1867, the license being renewed on 21 August 1869 and 9 September 1870. However, at that point, for reasons unknown, the license was transferred to Thomas McAuliffe in April 1871. It is not clear whether this was her father or her youngest brother, though perhaps the latter is more likely as her father would have been over 70 years old, her brother about 24. But the venture was short-lived, for later that year (November) Robert French, a builder, cabinetmaker and undertaker, took the license and renamed the Inn, French's Family Hotel. That too did not work out, for on 15 August 1872 the Queanbeyan Age reported a new licensee, Michael Sheedy, and a new name, the Australian Hotel. As far as we know, Margaret and the children were still living on the premises, which may have been uncomfortable for the series of external licensees, as there is some evidence that Margaret was a strong personality. On 23 July 1873 Margaret took back the license, keeping the name the Australian Hotel.

Margaret had her license renewed on 2 September 1874, just weeks before her conviction for assault (see below). That conviction led the court to opine that she was not fit to hold a license, and thereafter she ran the premises as a boarding house, which judging by numerous newspaper references seems always to have been known simply as 'Mrs Lee's'.

The boarding house of course retained the inn's 'long room', which over the decades was a popular venue for public meetings, exhibitions, medical consultations, auctions, presentations by insurance companies and sale of various goods by travellers (there are numerous references in Queanbeyan newspapers from 1869). This no doubt provided Margaret with extra income to supplement that from her boarders. There are also newspaper references to 'Mrs Lee's stables' which would have provided further income, and an article in the Queanbeyan Observer as late as 17 June 1904 describing a ploughing competition in 'Mrs Lee's paddock near the weir' perhaps for a fee. It is clear from various advertisements and articles that she was taking boarders up until at least 1912, though she was surely assisted by unmarried daughters Ellen and Deborah, who lived with her.

There is no doubt Margaret was a strong woman, in every sense of the word. Once her older sister Ellen died aged only 29, and then Margaret lost her husband William while still in her early 30s, she may well have seen herself as having a leading role in the family, as the oldest surviving sibling. We know that she took care of her sister-in-law Mary Ann McAuliffe (nee Flanagan, also referenced on this web site) for a while when she needed care, and there are other anecdotes as to Margaret's fortitude.

'Fire. On Sunday the grass in one of the plots of the garden belonging to Mrs Lee, in Crawford Street, caught on fire, presumably from some natural but unknown-cause. Mrs Lee went out to fight the flames, and after a long struggle succeeded in doing so,but in the endeavour she had a narrow escape from serious injury, the flames having burnt away a quantity of the clothes she was wearing. Fortunately there was no serious effect from the exciting incident. [Queanbeyan Age Wed 4 Dec 1901] (Margaret would have been 68 years old)

But there is also some evidence of a forceful character and some poor judgement. Particularly unfortunate was her conviction for what seems to have been quite an aggravated assault on an employee at her Australian Hotel, Mary Martin, in late September 1874. We do not know the provocation, assuming there was provocation, but Margaret pleaded guilty, was fined £5 and was deemed by the Judge to be unfit to hold a publican's license. She later had to pay Mary Martin nearly £7 arrears in wages (was the demand for her pay the 'provocation'?). Following this the Australian Hotel became Mrs Lee's boarding house, Margaret announcing her 'retirement' in the Queanbeyan Age on 8 October 1874.

During and following this time there was an ongoing problem with the flooding of her premises, as William had unfortunately built the inn on a natural watercourse at the corner of Crawford and Morisset Streets. Extracts from Cross & Sheedy, Queanbeyan Pioneers, 1983, p192, outline the issue:

'To Margaret Lee belongs the honour of being the only ratepayer ever to reduce the Queanbeyan Municipal Council to near Bankruptcy. The problem was caused as much by her husband's lack of foresight in building his hotel in a dry watercourse as it was by the road engineer who, during the drought in 1887, supervised work on Crawford St. The old inn had been flooded in 1861 and 1870 during major inundations but after 1887 Mrs Lee was knee-deep in water after almost every heavy fall of rain. In 1888 she received damages of £150 which the Municipal Council could barely scrape together and until her death in 1918 she continued to wage war; in 1917 the cost of defending legal suits brought by Mrs Lee reduced the Council's contribution to the sinking fund to only £50.'

The extract above hardly does justice to the saga, which raged for nearly forty years, and was well reported in the local newspapers. It eventually not only threatened the Council's finances but seems to have bankrupted Margaret, then over 80 years old. Having (probably predictably) lost her ongoing battle, Margaret was declared bankrupt only a few months later, sequestration date 27 June 1916.

By whatever means, it appears that Margaret and her two daughters continued to live in their home in or adjoining the original inn, which was finally demolished some years after her death. Margaret died on 22 October 1918, aged 84. She was buried with William, and daughter Catherine, in the Queanbeyan Riverside Cemetery.