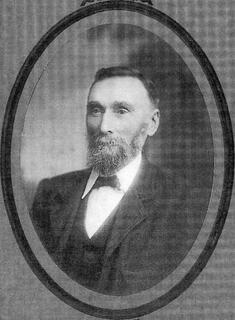 Jeremiah was the sixth child of Thomas and Mary McAuliffe, and the last born in Ireland before the family migrated to Australia under a bounty scheme, arriving in Sydney on the ship 'Herald' on February 9, 1845. Jeremiah was 10 months old on arrival. Three more children were born after they arrived in Australia

Details of Jeremiah's early years are scarce, but a report of 1864 shows that he had acquired building skills: 'The tender of J McAuliffe has been accepted for the erection of a wooden building (￡185 ) and fencing (5/- per rood) at Jeir Public School'. [Goulburn Herald 18.3.1864]

He was almost thirty when he married Johanna Leahy [1851-1933] on 25 April 1872 at Gundaroo. He established his home 'Springfield' in the Nanima area and later lived in the old 'Nanima' homestead which had been erected for John Jobbins in the 1840s. He and Johanna were to have a family of eleven children.

He acquired a portion of the Nanima property in 1905 when it was subdivided for sale: 'The well-known Nanima Estate at Jeir was recently subdivided for sale and has been pretty well absorbed by adjoining landholders Messrs J McAuliffe, J Bush and W Ryan being the principal purchasers'. [Queanbeyan Age 19.9.1905]

Annie, one of their daughters suffered a serious accident in 1906: 'The young lady was out riding with her sisters when the horse bolted. She was thrown and suffered a fractured skull. Dr Hare is attending and she is doing as well as can be expected'. [Queanbeyan Age 31.8.1906]. She survived this accident but nevertheless had an early death:

Some time ago the young lady entered the Yass Convent with the intention of joining the order but failing health caused her to give up the calling. Miss McAuliffe had the misfortune to lose her sight and gradually faded away.... The funeral on Saturday was largely attended, the bell of St Augustine's being tolled at the hour of the internment. The Rev Father Dwyer read the prayers for the dead. [Queanbeyan Age 23.1.1912]

Jeremiah and his brother Thomas were strong supporters of St Francis Xavier's Roman Catholic Church at Hall and Annie was one of two of Jeremiah's daughters who became nuns.

He became a very successful farmer and grazier. 'His properties, 'Nanima' and 'Springfield' were model ones. [Jeremiah] was a prominent supporter of the Yass P. and A. Association, and took a keen interest in public matters generally. He was delegate from Yass in connection with the selection of the Progressive candidates'. [The Yass Courier 1 Apr 1920 p.2]

Johanna survived until 27. January 1933 when she died aged 81 years

An old and highly respected resident of the district departed this life in Sydney yesterday in the person of Mr. Jeremiah McAuliffe. He had been ailing for some time from an internal complaint, and went to the metropolis for treatment, becoming an inmate of St. Vincent's Hospital.
Recovery did not come, however, and he died as stated. By his death his wife and family lose a good husband and father, his friends a sturdy acquaintance, and the district one of its pioneer settlers.

His properties, 'Nanima' and 'Springfield' were model ones. Deceased was a prominent supporter of the Yass P. and A. Association, and took a keen interest in public matters generally. He was delegate from Yass in connection with the selection of the Progressive candidates. The late Mr. McAuliffe was 76 years of age, but quite agile and energetic. He leaves a widow and grown-up family, for whom general sympathy will be felt. Mr. T. McAuliffe, of Jeir, was a brother, and Mrs. Callaghan, of North Yass, a sister. The late Mr. McAuliffe had been a resident of the district for quite half a century. He had the respect and esteem of all, and it was with sorrow that the news of his death was heard, The funeral will take place at Yass, leaving St. Augustine's Church at 3 p.m. to-morrow. [The Yass Courier, Thu 1 Apr 1920 p2]

Mr. Jeremiah McAuliffe, of 'Nanima', Murrumbateman, died at St. Vincent's Private Hospital on March 31. Mr. McAuliffe's death has deprived the Yass district of one of its most highly respected residents. The home of the McAuliffe family has ever been a haven of rest for the priests on their way to the outlying stations. Mr. McAuliffe deemed it an honour to bestow his hospitality upon the 'Soggarth Aroon,' for whom there was in his heart that deep love and reverence, which is characteristic of gentlemen of his race.

Mr. McAuliffe, who was 76 years of age, was born in Ireland; but came to Australia with his parents when quite young. He settled in the Queanbeyan district; later on he moved to the Yass district, where he acquired large landed property, which he held at the time of his death. He was an enthusiastic farmer, and took an active interest in all that pertained to the development or welfare of the district. The poor and distressed ever found in him a sympathetic friend. In 1872 he married Johanna, daughter of the late Daniel Leahy, of Gundaroo, who survives him. There were 11 children of the marriage of whom 10 are living to mourn the loss of a devoted parent. Eight daughters — Mrs. Smyth (Sydney), Mrs. Dyce (Gundaroo), Mrs. Hibberson (Hay), Misses Honora, Mabel, and Veronica— and two sons — Thomas (Nanima), and Francis (Springfield). During his last illness he was frequently visited by Monsignor O'Haran, and received all the absolutions of Holy Church. The remains were conveyed to Yass and interred on Good Friday. Rev. Father Leonard, P.P., Yass, accompanied the remains from Goulburn and officiated at the graveside. The funeral was one of the largest over seen in Yass. — R.I.P. [The Catholic Press, 22 April 1920, p 35]