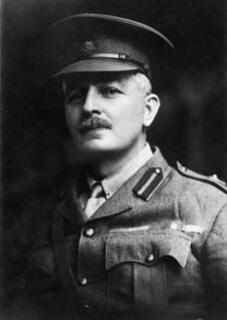 Cranleigh Farm
Cranleigh Farm was the name given to Soldier Settler Block 17, Belconnen, which was taken up...

Major-General James Gordon Legge was born on 15 August 1863 at Hackney, London, eldest of eight sons and a daughter of James Henry Legge, banker, and his wife Ada Jane, née Way. His family moving to Australia in 1878.

Legge is best known and most celebrated as a very high ranking military officer. He was Chief of the General Staff, Australia's highest ranking army officer between 1914 and 1915 and again from 1917 to 1920. (His son, Stanley Ferguson Legge, reached the rank of major general.) Legge graduated from the University of Sydney with a Bachelor of Arts in 1884, Master of Arts in 1887 and a Bachelor of Law in 1890. When he retired from his last military appointment as Commandant of RMC Duntroon however, he became, for quarter of a century, a Weetangera farmer. His 741 acres was a Soldier Settlement block. He named the farm 'Cranleigh' after the school he attended in Surrey, UK.

The Queanbeyan Age anticipated his retirement 'at the end of July' 1922, then reported a year later that:

General Legge has taken over a farm near Weetangera Public School and intends to convert the property into a model farm. The General has made extensive plans to make this land thoroughly productive... [Queanbeyan Age (Weetangera correspondent) 24.4.1923]

Work on General Legge's farm is making good headway. Some of the old residents inform me that they are very much surprised to see such a remarkable change in a place in such a short time. We are glad of this as it shows what can be done in our district. We hope before long to have General Legge living amongst us. He has shown himself to be a gentleman whom the district will be proud to welcome as a permanent resident. [Queanbeyan Age (Weetangera correspondent) 6.7.1923]

Legge appointed Matthew O'Brien as his farm manager / overseer, and had a new cottage built for him and his family:

Mr Matthew O'Brien's residence erected by General Legge upon his property here has been completed. Mr Wilson was the contractor and the work was very well done. Mr O'Brien has now taken up residence [Queanbeyan Age 12.10.1923]

At this time the new farm was evidently a hive of activity:

Great changes are being made on the farm lately taken over by General Legge. Preparations are well in hand for the construction of a fine residence for the General and residences for his workmen are now being erected. The latest machinery has been introduced to the place including a Fordson tractor which is doing good work. In addition a cement weir is in course of construction which will conserve a large quantity of water. A fine collection of pigs have been brought into the district. They are of two well-known varieties – the Berkshire which is deservedly the most popular class of pig in Australia ............ General Legge has been fortunate in securing the services of splendid workmen... [Queanbeyan Age (Weetangera correspondent) 27.7.1923]

The residence for Legge, his wife Annie Francis and their three sones (Stanley, Eric and George) was completed by the end of 1923. It was of very unconventional design, based on houses that he remembered from time spent in India. The house was square with a flat roof, resembling a fort or block house construction being built of concrete blocks moulded on site with sand from Ginninderra Creek. Internally there was a central verandah courtyard surrounded by ten rooms, with each room having an entrance to the courtyard.

His initial venture into pig farming was premised in part on the expectation that the surveyed railway line from Canberra to Yass, which passed close to his property, would be built and a rail service come into being. This did not eventuate, but drought also played a part in the failure of the piggery. A later venture into potato production also failed.

Legge lived at Cranleigh until 1947 when ill health forced him to move to Melbourne to live with his son. His wife, Annie, had left three years earlier due to her own ill health and had lived in Melbourne, then Sydney, under the care of family members. Legge received news of his wife's death in September 1947 while he was ill with bronco-pneumonia in a private hospital. He died little more than a fortnight later on the 18th September aged 84.

By 1961, only the foundations of Cranleigh Farm and the surrounding windbreak were left. Legge planted the windbreak of pine trees to shelter the homestead and a small orchard. The house was demolished in 1951 and building remains were cleared from the site in 1986 to form an urban park.

The park is dominated by Legge's pines with approximately 161 remaining in multiple rows delineating the park's borders on the north, south and west sides. There are many vacant spaces within the rows, indicating the previous existence of more trees than those that exist today. A grove of fruit trees in the northern half of the park is the remains of an orchard planted by Legge. These trees were planted in three or four rows. Approximately 20 trees remain.

The death occurred in Melbourne after a long illness of Lt.-General James Gordon Legge at the age of 84 years.

One of the outstanding soldiers of Australia prior to and during World War I., the late Lt.-General Legge had on his retirement turned to farming, and purchased a station property at Weetangerra which he conducted until his last illness ['Cranleigh'].

Born in London in 1863, he was educated at Cranleigh School, Surrey, before coming to Australia, where he was a scholar of Sydney Grammar School prior to entering Sydney University, where he gained the degrees of Master of Arts and Bachelor of Law. While a school teacher, he joined the New South Wales Militia in 1887 and transferred to the permanent forces in 1894 with a rank of captain. He saw service with the Australian troops in the South African war and, after his return, transferred to the Commonwealth Forces in 1902 with a rank of major. He rose rapidly
and at the outbreak of war in 1914 he was Chief of the General Staff. He was appointed military secretary to defence headquarters at Melbourne in 1908 and Army Quarter- master in 1909. From 1904 to 1909 he was A.D.C. to the Governor-General.

He took a prominent part in the introduction of universal military training in Australia, having draft-ed the plans which received the support of the late Lord Kitchener on his visit to Australia in 1910. From 1912 to 1914 he was the re-presentative of the Commonwealth on the Imperial General Staff at the War Office. He returned to Australia early in the war and in the following following year assumed command of the First Australian Division on Gallipoli after the death in action of General Bridges. He subsequently returned to Egypt to organise the Second Australian Division and saw service in France. He was the division commander chiefly responsible for the organisation of the attack on Pozieres heights. In 1918, his son was killed in action as a private in the same division as his father commanded.

After the war, Lt.-General Legge was appointed Commandant of the Royal Military College, Duntroon, and on his retirement in 1922 he became a farmer. In the early days of Canberra as the new Federal Capital, he was a familiar figure coming in for supplies, but he avoided public life. His friendly disposition earned him the friendship of his neighbours in the Weetangerra district. In recent years his health had been failing, and his wife died in Sydney on September 2 last while he was ill in a hospital in Melbourne. He leaves one son, Eric Stanley, of Weetangera.