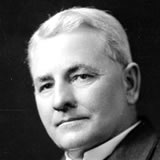 Henry Edmund (Harry) Holland (1868-1933) was born on 10 June 1868 on a farm at Gungahlin, near Canberra. His parents were Edward and Mary (née Chaplin). His father Edward was born in 1841 at 'Lanyon' before moving to Ginninderra, where he was a member of the famous Ginninderra cricket team. Henry was one of four children, the other being Ada Mary, Annie Eva, and Leila Ellen.

His primary schooling was at Ginninderra Provisional School, which was housed during the week in Saint Francis' Catholic Church, Ginninderra, the first Catholic church in the Canberra district. His education was interrupted from time to time by the need to help his family and he finally left school at age 12. At age 14 he was apprenticed as a compositor to the Queanbeyan Times.

Having experienced poverty and unemployment during the harsh depression of the 1890's, Harry became active in radical politics, editing a number of socialist publications and supporting a number of major union struggles.

He helped form the Tailoresses Union in Sydney in 1901 and led them in a successful campaign for better pay and conditions. He twice ran for parliament as a socialist candidate. But it was his support for the striking miners of Broken Hill that led to his imprisonment on a charge of sedition in 1909.

In 1912, he migrated to New Zealand, arriving in the middle of the bitter Waihi miners' dispute in which a striking miner was killed. He was prominent in the formation of the New Zealand Labour Party and in 1918, was elected to Parliament. The following year, he became leader of the Parliamentary Labour Party, a position he held until his death in 1933, just two years before New Zealand's first Labour Government was elected. He does in 1933 when Leader of the Opposition, and his funeral was attended by more than 4,000 people.

A sign at Ginninderra Village in Canberra commemorates labour hero Henry (Harry) Holland who made a significant contribution to both Australian and New Zealand politics. The sign was erected with the assistance of the New Zealand Government.