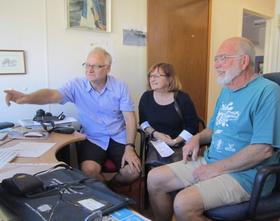 A CWA 'open day' at Gungaderra homestead which our volunteer Heather Wilford was involved in, and an opportunistic invite from Tony and Margaret Morris brought Tony and Michelle Winter to the museum today - descendants of the family of John and Jemima Winter (nee McPherson). John and Jemima built themselves a simple homestead in what is now the suburb of Harrison, and called in 'Red Hill', for the nearby ironstone outcrop. The property was much later purchased by the Crace family and given the name 'Gungaderra' - a combination of Ginninderra and Gungahlin.

Tony and Michelle (who live at Coffs harbour) had already paid a visit to the ACT Heritage Library in Woden, and been rewarded with a bundle of family information located by helpful staff there. While our web pages already have entries for Gungaderra and for John Winter, there is a lot more that could be said about this north Canberra pioneering family - and their inter-relations with other pioneer families such as the Shumacks, Ginns and Rolfes. Hopefully we can build up a Winter family folder that will tell their story and have it available to the public close to where they first settled.

A trip to Queanbeyan Museum »