Museum put 'on the map' 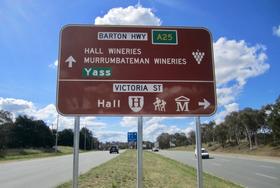 Locals will have spotted (or missed!) the new road signage on the Barton Highway for the right turn into Victoria Street and the village. We are delighted that the powers that be have put us on the map by incorporating the standard national touring sign for 'Museum'. The standard symbols for 'Heritage' and 'Walking trail' are also included, and together they signify that this is a place well worth turning off to have look at.

According to the National Tourism Signing Reference Group, the museum symbol "denotes a building used as a museum regularly open to the public, which displays items of a general or thematic nature and features a high level of interpretation".

The heritage symbol "denotes the location of attractions, display/interpretive centres, sites, monuments and other objects of historical interest", while the walking trail symbol "denotes a trail designed for the safe passage of pedestrians that complies with all safety requirements of State and Local Government authorities. Generally trails using this symbol will also provide some level of interpretation". Hall has its own four kilometre bush trail around the village, and is on both the Canberra Centenary Trail and Bicentennial National Trail.