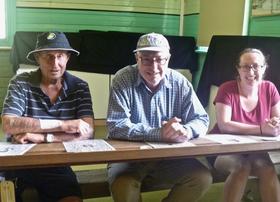 A small Southwell family group visited the Centre by special arrangement on Saturday 23rd December. Lesley Southwell is a great grandson of Samson Southwell who made his home at 'Wattle Park' Bedellick in 1874. Les's grandfather is William Abel Southwell, and his father Roy Stanley Southwell.

Les was being treated to a tour of some significant family places by his son Terry and daughter Elizabeth - including wattle Park church and the Weetangara Cemetery.