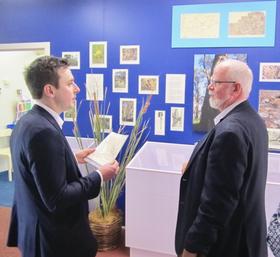 Labor Member for Yerrabi, Michael Pettersson, launched 'A tale of two villages' at the Centre yesterday. The exhibition is a contribution to the Canberra and Region Heritage Festival, which has dozens of events going on all around the region.

Michael was welcomed and introduced by Honorary Curator Alastair Crombie. Alastair observed that the 175,000 residents of Belconnen and Gungahlin were living almost entirely with the catchment of the Ginninderra Creek - traditionally known as 'Ginninderra'. The Centre's aim is to unearth and relate the stories of life in the Ginninderra district before Canberra - aboriginal prehistory and European settlement.

Allen Mawer, curator of the exhibition, observed in thanking Michael that local MLA's had been helpful in supporting endeavours since the closure of the Hall school in 2006, enabling the school site to become a thriving 'hub' for a range of community groups and activities. He also recognised and thanked the Progress Association for their support of the exhibition, and all the volunteers who had contributed to it.

We estimate that nearly 200 people visited the exhibition over the weekend, including a lot of Sunday's concert-goers, before and after the Concert. Our gratitude to all those who contributed to the $273 received in donations, and $610 raised by the trading tables. A very rewarding outcome!

'A Tale of Two Villages'

Audience for the launch

Audience for the launch