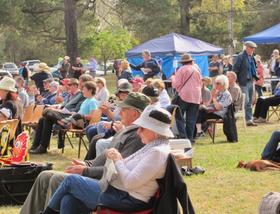 Well over three hundred patrons enjoyed an afternoon of fine band music under a sunny sky at the re-scheduled 'Twilight' concert. The Bands, under the direction of Adam Power (Victoria Street Brass and Canberra Youth Brass) and Kevin Knapp (Canberra Brass) put on a show full of toe-tapping brass band music which included a lot of popular favourites. This lily was superbly gilded by soloist Katie De Veau who sang to the accompaniment of Canberra Brass 'Moondance', 'Roses of Picardy' and 'Fly me to the moon'.

The finale was a surprise item - the combined bands playing 'The Hall March', by Les Smith, after Honorary Curator Alastair Crombie had been presented with a framed copy of the work by Band President Ian Brown. The citation says "........in memory of the composer Len Smith who made a great contribution in the early years of the Hall Village Brass Band. To mark the occasion of the 10th annual concert".

Patrons were able to punt in the raffle, with a selection of prizes very kindly given by the concert's long-standing sponsor - Barnett Lilley and Associates - and other local enterprises. The new '1882 Bar and Grill' supplied a 'Dine and drink' voucher and also provided lunch for the Band members; Homeleigh Grove gave an Olive Selection, Capital Wines a Produce Platter and Wine Tasting for two, and another new Hall business Jelly Bug Treasures, provided a Bird Feeder. Our warm appreciation to these local businesses for supporting this community event.

Thanks also to the Rotary Club of Hall, who very kindly stepped up when the Preschool found itself unable to staff the sausage sizzle (school holidays!); Rotary did the BBQ and have passed on the takings (just over $400) to the Preschool. Every sausage was accounted for.

Many of the concert-goers availed themselves of the opportunity to also visit the Hall School Museum and Heritage Centre, where a new display - 'A tale of two villages' - was launched yesterday by Michael Pettersson MLA. Many who had not visited the Centre before told us that they would be coming back as there was too much to see!

Museum volunteers feel well rewarded for taking on the challenge of two major events in one weekend. The concert will have added around $1,735 to our funds and brought a lot of people into contact with Centre for the first time. Donations and sales at the trading tables from visitors to the exhibition brought in a further $883 - making a total of $2,618 - our postcode!

Our photo shows a section of an appreciative audience.