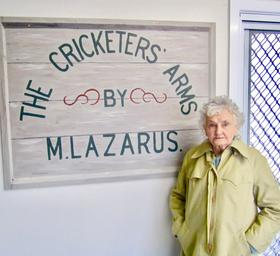 Heather Duthie remembers as a five year old finding coins beneath the old verandah when the Cricketer's Arms was demolished in 1938. Her father William Patrick O'Brien and mother Eleanor had left their farm at Bedelluck some time before and moved to the old hotel which became home for Heather and siblings Marie, Gordon and Janice. They were not leaving farming behind however, as the hotel was located on 80 acres of farm land, divided in half by the road into Hall.

Heather's great grandfather John O'Brien emigrated from Ireland in 1841; he married Jane Daley, another Irish migrant, in 1850. Only six of their ten children survived childhood. One of them, Matthew O'Brien, worker for many years as a boundary rider for Edward Crace on the Gungahlin Estate. He was also a fine sportsman, 'crack pigeon shot', musician, and horseman. Heather's father, William Patrick, was one of Matthew's eight children.

Heather was not old enough to attend Hall school, but remembers 'sitting in' on occasions. When water was short her Dad's horses 'Jill' and 'Gip' were harnessed to drag water up from a permanent spring down towards Halls Creek. With typical bush humour 'Bill's' placid collie was named 'Rowdy'. When the hotel was demolished the family moved into the then new cottage a few hundred metres further back from the road which is still standing today.

It is always a pleasure to get a visit from members of the district's well-known pioneer families. Thank you Heather for helping us know more about the O'Brien clan!