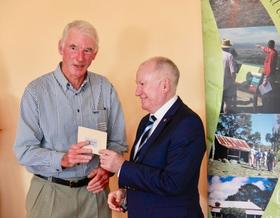 The smile says it all? Heritage Minister Mick Gentleman and Alastair Crombie

The Centre is again an ACT Heritage grant recipient - two grants in fact! Our two grant applications were 'Stories in dirt' - a geomorphological study of a section of Halls Creek - and for a project to add an augmented reality dimension to some of the Hall village heritage interpretive signs.

'Stories in dirt' will be a study of the landscape history of a section of the creek from ancient to modern times, with the research to be carried out by two eminent geomorphological consultants - Dr Philip Hughes and Dr Marjorie Sullivan. The augmented reality project will create digital enhancements for six of Hall's heritage interpretation sign, enabling those with a smart phone or other device to access additional content. If this project is successful we will be aiming to introduce similar capability within the Centre.

Total funding available under the grants program for last year was about $350,000 and grants made are generally under $10,000 and have some financial or in-kind contribution by applicants.
We are of course delighted to be amongst the successful applicants and look forward to getting the projects underway.