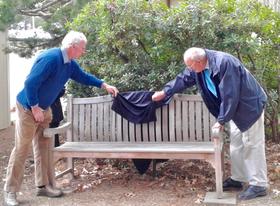 On Thursday 4th October a large crowd gathered in the Peace Garden for the unveiling of a plaque in memory of our departed friend and colleague Val Wiseman. Amongst the large crowd were Val's husband John, son Andrew and his partner Bron, and their son Darcy. Large numbers of members from both the Mens Shed and the Centre filled the space surrounding the seat to which the plaque has been attached.

Alastair Crombie shared his earliest recollections of getting to know, and working with Val - in the Hall Landcare Group. In the recent past she was leading the effort to catalogue the Centre's collection on-line. Others then shared reflection and stories about their experiences of working with Val - all of which were another way of saying how much she is missed.

The special seat in the Peace Garden is only a few steps from the associated memorial planting organised by Val's former friends and colleagues at Greening Australia.

« 'Armistice and After' - an Exhibition