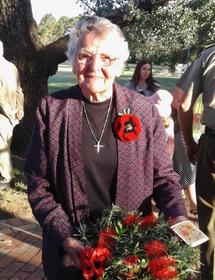 A large crowd of Hall and district people gathered at the Rochford Memorial Grove for the annual Remembrance Day service on Sunday The 6.00 pm service was supported by an army catafalque party, a piper, and a Naval Officer who gave the address. Prayers were lead by Marj Rule, from St Francis Xavier catholic church, and Angie Hazlehurst from St Michael and All Angels Anglican church. Bill Pearson and Dennis Greenwood hosted the occasion on behalf of the Rotary Club of Hall. Through the wonders of digital technology they were able to bring us a very realistic playing of Last Post and Reveille - buglers being in short supply on the Armistice Centenary!'

A wreath was laid on behalf of the Hall School Museum and Heritage Centre by Sr Pat Kinlyside, whose great uncle Clyde Hollingsworth, was one of the two local ANZAC's who did not return from the Great War. We greatly value our Hollingsworth / Kinlyside connections at the Centre and were delighted that Sister Pat was here to lay our wreath. The wreath was made by member Mardie Troth.

« Andrew Leigh opens Armistice and After