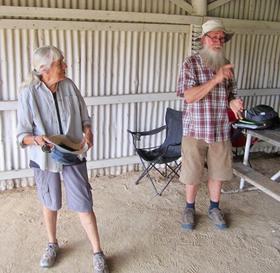 Consultant geoarchaeologists Philip Hughes and Marjorie Sullivan, who had just begun their field-work in the Aboriginal Sites Zone on Halls Creek kindly gave some precious time to a briefing for a number of very interested museum volunteers. Marjorie outlined the broad-brush story of the pre-agricultural landscape in the Ginninderra Creek catchment, describing how tributary creeks such as ours would have been more like a shallow chain of ponds, without any centre channel – let alone the very deep and steep-sided creeks we have now. Such chains of ponds would have provided rich resources of food – plant and animal – for Aboriginal people.

The project has the benefit of expert input from Carl Brown, Chair of the King Brown Tribal Group, and Karen Denny Buru representing the Buru Ngunawal Aboriginal Corporation. We are very pleased that Carl and Karen have been able to assist the project, and greatly value their contribution.

As well as their own world class experience and capabilities, Philip and Marjorie were able to attract a free half day of advice and field observation by Brad Pillans, recently retired professor of Earth Sciences from the ANU. Together with our own archaeological volunteer contributors the project is bringing to bear some very formidable intellectual firepower!

The project will report to the Representative Aboriginal Organisations, the Progress Association and Transport Canberra and City Services, as well as ACT Heritage, which provided the project grant. We propose to organise a fuller, public briefing during the 2019 ACT heritage Festival, when the project report has been completed.