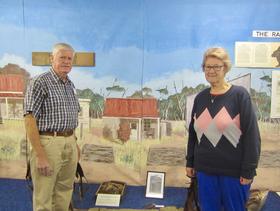 Dick Buitendam and his wife Kerry; between them is Dick's former home in Hall.

Some sixty years ago Dick Buitendam was a ten year old fresh off a ship from the Netherlands where his family had been living in Amsterdam. Another Dutch family had helped them find accommodation in a small cottage next to the garage. Dick told us of the 'great community spirit' in Hall, and the kindness of Jim Rochford in particular. Jim quietly delivered a new refrigerator to the house, and gave Dick a job on the petrol pumps at weekends. Dick recalls that he helped 'the Brown boys' on their mail runs.

The Buitendam family is one of around two dozen Dutch families who lived in Hall during the fifties and sixties – among others such as the Binks, Daamens, Penders, Vanderslachts, Noorhdofs, Groos and Broers. There was of course a significant influx of European migrants from many countries in the post-War decades, but the high numbers of Dutch families coming to Hall is rather distinctive. Most did not stay long. Often just long enough to get to the top of the government housing list in Canberra, A few bought or built however – such as the Penders, Daamens and Vanderslachts.

Alastair Crombie is working with Ann Penders to bring together the stories and photographs of these families, with the idea of creating a small display, or a publication some time in 2019. Ann was the eldest child in the Daamen family and married one of the three Dutch boys next door – Bert Penders.

If you have a particular interest in this project, please contact Alastair at : museum@ hall.act.au