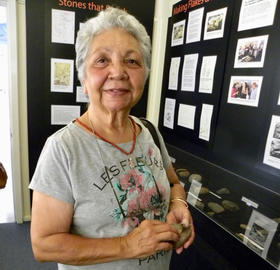 The Centre was recently privileged to welcome an extended visit from Aunty Matilda House. Aunty Matilda is a prominent Ngambri-Ngunnawal-Canberra Aboriginal elder. She was a member of the first ACT Heritage Council in 1992, the Canberra Citizen of the Year in 2006, and was awarded an Honorary Doctorate from the ANU in 2017 in recognition particularly of her role in helping establish the University's Tjabal Indigenous Higher Education Centre. Amongst many current roles, she is Chair of the Little Gudgenby River Tribal Council, one of the Representative Aboriginal Organisations consulted about the recent geoarchaeological study on Halls Creek.

After a welcome cup of tea on a warm day, Aunty Matilda reviewed the Museum display of the Aboriginal cultural landscape around Hall Village at the commencement of the 'Two Villages' exhibition. This display from 2018 shows local Hall Aboriginal food plants, the scarred tree and associated local stone artefacts from Halls Creek, nearby grinding grooves, the story of a Ginninderra king plate, the 1830s fire-made Ginninderra woodland depicted in Hoddle's paintings and the story of local Aboriginal cricketers in the mid 19th century.

She then viewed the display of Aboriginal stone artefacts from the Gillespie Collection ('Stones that Speak') and other items of interest in the Gillespie Collection. Aunty Matilda knew Lyall, and recalled some good arguments they had had! She then visited the Aboriginal scarred tree on Halls Creek, noting it was one of the best canoe trees she had seen. She was very supportive of the story of the Halls Creek cultural landscape being told more widely, including in a proposed new display at the Museum during the upcoming Heritage Festival of 2019.